On #YourMoney with Michelle Martin, he dived deep into the lessons learnt and insights gained from both his own personal experiences in the public and private sector, as well as from studying historical success stories of entrepreneurs. In particular, he recounts his first foray in start ups as he founded his first Unicorn company, the large semiconductor company: United Test and Assembly Center - while he was still working full-time at Texas Instruments.

Michelle Martin: You had to take leave from Texas Instruments in order to make that presentation for the Venture Capital money. What are your thoughts about people thinking “I have a day job that is why I cannot start an MNC”?

Inderjit Singh: While I was working for Texas Instruments, I stayed in my room using my own free time at night to do the work of planning my company. You can adopt this way of thinking initially, while still having a full-time job, but there will come a time when you have to immerse yourself fully into the startup. It may seem manageable in the planning stage, but as soon as the company starts running, you need to be immersed in the happenings and own the risks involved. It cannot be just a part-time thing if you want to be successful.

Michelle: Speaking of risk, you mentioned that Singaporeans are risk-averse and everyone is so comfortable with the status quo. Having lived through the system here since 10 months old, what is your take on this?

Inderjit: I think there are two parts to risk taking - one is your nature, and the other is nurture. I grew up in a poor family where my father had two jobs so for the first 20 years of my life, I was staying in the factory’s quarters. The environment that I grew up in and the challenges that I faced had pushed me to try new things to get out. The risk-taking spirit can either be pulled, where you take the opportunity with the risk or pushed, where the environment pushes you to do something different.

Michelle: To what extent would you say social capital networks of relationships are crucial for entrepreneurial success?

Inderjit: I would say it is actually very important as it is a life lesson that everyone has to learn multiple times. When I was going through the first rounding, I tapped on my network of Taiwanese friends to kickstart the business and create success. Another case in point was when I wanted to target Siemens, an extremely large German company as one of my first customers, I engaged the help of my university professor, who was already retired. He assisted me in creating a link into Siemens as he was German-trained. With his broad connections and expertise, the collaboration was successful. In that sense, social capital and networking in the business world is largely important to forge success.

Michelle: Many young people aspire to be entrepreneurs, but if you don't have a business idea that is workable, you're going to be called out eventually. What do you think of this “Fake It Till You Make It” mindset in the case of entrepreneurship?

Inderjit: It is extremely dangerous. You certainly will not last long. Many entrepreneurs fake it to the point that they overrepresent what they are capable of doing. However, there is a limit to how far you can take the lie. For example, when I start a business, I may exaggerate the target scale of my business to attract numerous investments initially. This is a mismatch between your capabilities and matching up to the execution. I always believe that your reputation is the most important and not the quick games that you can get by through lying. If I know that I have to give up something, I will give that up over damaging my reputation.

Michelle: I would love to hear your thoughts on scaling. I have recently learnt that as companies scale, the initial idea tends to lose ‘voltage’. What do you think the key to scaling is?

Inderjit: In my book, I have a chapter called ‘Thinking With The Heart And Not With The Head’. I argue that for most entrepreneurs, they start off with a gut feeling rather than with logical thinking - that is why they do things differently. However as the company grows bigger, there ought to be some structure which requires more logic in place. This is the part where you need to start thinking with more logic and less emotions. Many entrepreneurs continue to run their bigger businesses the same way they were running it when it was small - and many end up failing as a result. An example that I echoed in my book was Steve Jobs. Apple was a very successful company but when it became big, Jobs could not manage it and he was fired. The board brought in John Sculley and Jobs was off to start another company instead. Along his entrepreneurial journey, he learnt that he needed to think more with the head rather than with the heart in face of developments. But also, it is quite simple to think logically - but if everyone only does that, no one will achieve the breakthroughs and the disruptions that come along.

For more, tune in to Your Money with Michelle Martin on weekdays from 9AM to 12PM.
#YourMoney

She Once Sold Her Crafts Outside A McDonald's Outlet. Now She Pioneers A Booming Jewellery Empire. 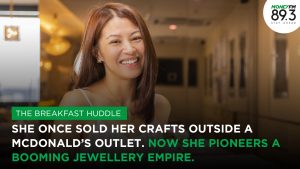 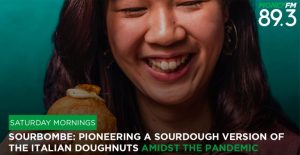 Mandy Chan: A Millennial Thriving In The Business World 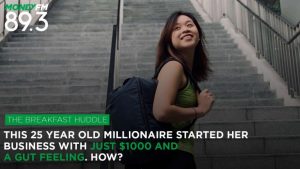 Nurturing A Child Who Knows How To Make Money
Download the podcast.

The Art And Science Of Entrepreneurship