Xi: China aims to turn itself into market for world 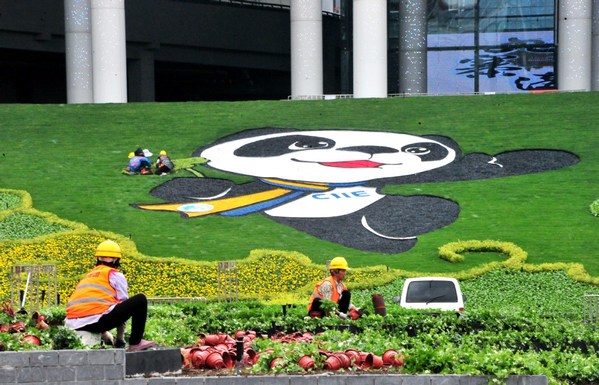 Gardeners trim a lawn featuring the image of Jinbao, the mascot of the China International Import Expo, at the National Exhibition and Convention Center in Shanghai on Oct 15. [Photo by Yang Jianzheng/For China Daily]

President Xi Jinping delivered a keynote speech via video link at the opening ceremony of the third China International Import Expo and Hongqiao International Economic Forum on Wednesday. Here are some highlights.

On China's opening-up over the past year

On openness and cooperation

On new stage for China's development

On China's plans for further opening-up

It will work for the early signing of the Regional Comprehensive Economic Partnership, speed up negotiations on a China-EU investment treaty and a China-Japan-ROK free trade agreement, look forward to more exchanges and mutual learning with high-standard free trade areas in other parts of the world.

It will take an active part in WTO reform and in cooperation at the United Nations, the G20, APEC, BRICS and other fora; It will work with related countries to promote high-quality Belt and Road cooperation.