President Xi Jinping attended a grand gathering on Wednesday celebrating the 40th anniversary of the establishment of the Shenzhen Special Economic Zone, and delivered a speech. Here are some highlights. On Aug 26, 2020, people celebrated the 40th anniversary of the establishment of the Shenzhen Special Economic Zone. ZHOU SHUNBIN FOR CHINA DAILY

- The establishment of special economic zones is a great innovative move made by the Communist Party of China and the country in advancing reform and opening-up, as well as socialist modernization

- Shenzhen is a brand-new city created by the Communist Party of China and the Chinese people since the country's reform and opening-up began, and its progress over the past 40 years is a miracle in the history of world development

- Shenzhen has made five historic leaps forward since the establishment of the special economic zone 40 years ago: (1) From a small backward border town to an international metropolis with global influence; (2) From implementing economic system reforms to deepening reform in all respects; (3) From mainly developing foreign trade to pursuing high-level opening up in an all-round way; (4) From advancing economic development to coordinating socialist material, political, cultural and ethical, social and ecological advancement; (5) From ensuring people's basic needs are met to completing the building of a high-quality moderately prosperous society in all respects.

- Shenzhen's achievements in reform and development come through trials and tribulations

- Shenzhen has acquired valuable experience in reform and opening-up

- Forty years of reform and opening-up of Shenzhen and other SEZs have created great miracles, accumulated valuable experience and deepened the understanding of the laws of building the SEZs of socialism with Chinese characteristics 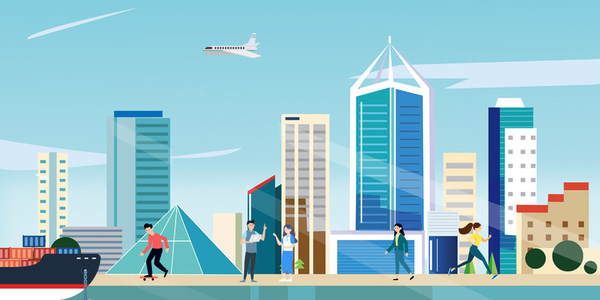 An artist's rendering celebrating the 40th anniversary of the establishment of the Shenzhen Special Economic Zone. [Graphic by chinadaily.com.cn]

- Shenzhen should enrich the new practices of "one country, two systems", and lead the country's process of socialist modernization

- Shenzhen must deepen reform and opening-up to keep pace with the times; Shenzhen should promote entrepreneurship and the protection of intellectual property rights

- Shenzhen should accelerate advancing opening-up with institutional guarantees, such as rules and norms

- Governance system should be driven by innovation