BEIJING, Nov. 23, 2020 /PRNewswire/ -- November 18th, 2020, ThoughtWorks was invited to join 2020 International Conference on Gender Equality and Corporate Social Responsibility (CSR) & Women's Empowerment Principles (WEPs) awards ceremony, which was held by UN Women China in partnership with the Delegation of the European Union to China. ThoughtWorks was awarded Leadership Commitment in China by the organizers. 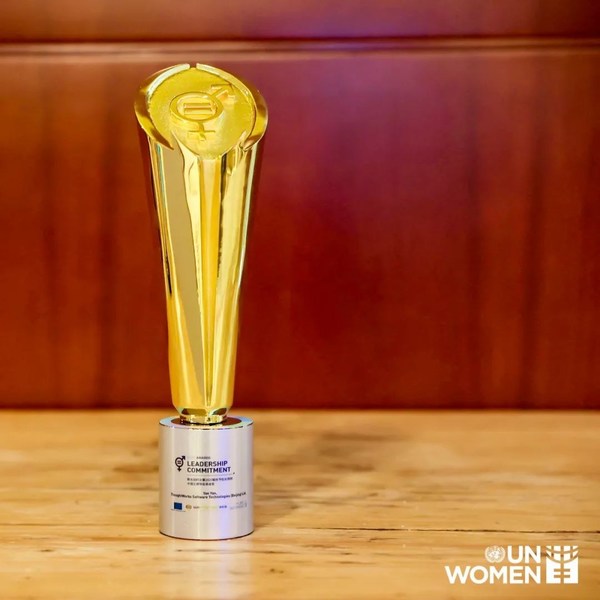 Over the years, ThoughtWorks has committed to develop a business and culture environment that promote gender-inclusive and gender equality. The company encourages women in technology to play a greater influence at workplace, marketplace and social community.

Yao Yao, a member of ThoughtWorks China management team, has been actively engaged in development of women in technology. Speaking at the ceremony, Ms. Yao said, "It is a great recognition for ThoughtWorks to be awarded 2020 Asia-Pacific WEPs Awards by UN Women".

Attended by nearly 150 private sector leaders, social entrepreneurs, civil society representatives along with EU and UN officials, the conference took time to reflect the progress made on gender equality and women empowerment in later stage of the pandemic new norm, challenges and future expectations were also talked at the conference.

At the opening, Smriti Aryal, Head of UN Women China office called on all participants to actively embrace international standards on enterprise commitment, strategy and project proposal; and all the stakeholders should make their voices heard. She mentioned, "The private sector, companies and enterprises have a key role to play. An employer can bring a positive impact by creating decent work opportunities, promoting equal pay for equal work, and reducing the burden of unpaid care work for women. Meanwhile, it is also important for companies to promote the next generation of female leaders as the decision-maker for future business practices".

Ms. Mu Hong, Director-General of Liaison Department at All China Women's Federation, presented the work ACWF has done in advancement of gender equality in China, and stressed the importance of adding gender factor to local policy and practice. She said, "Guaranteeing equal economy right and strengthening economic empowerment for women is an important topic, which will be a key part for next round of the Program of China's Women Development".

Ms. Zhang Haidi, president of the China Federation of the Disabled stressed: "The disabled female is the most disadvantaged group in human society that need help badly, and they are also an important force in promoting peace and development. The sustainable development of humankind needs to rely on and bring benefit to the disabled female."

In the conference, UN Women presented WEPs Award to 10 prize-winners. As the first WEPs Initiative in Asia-Pacific, the award is intended to applaud model business practices that in compliance with gender equality of Women's Empowerment Principles proposed by UN Women and United Nations Global Compact. WEPs has 7 principals, encouraging enterprises put gender awareness in the whole value chain of its business.

Yao Yao of ThoughtWorks spoke on behalf of enterprise leadership receiving the award, "For many years, we have been trying our best to influence the society, push for gender-inclusive and gender equality in business world, and women in technology is always the focus. ThoughtWorks finished IT experts title open reply just recently, and female account for 45% of the newly promoted experts! With the helping hands of more fellows, we wish to fulfill our commitment with tangible action by offering bigger platform for these excellent female in technology, so that they can lead by example for females in other industries."

WEPs is the main tool for enterprises to reach gender equality target of the 2030 Agenda for Sustainable Development. To date, 102 companies in China have pledged action to advance the WEPs, and more than 3,700 companies have done so globally. An international network of like-minded companies, the WEPs platform connects businesses of all sizes across multiple industries, including corporations such as ThoughtWorks, Alcatel-Lucent, IKEA, Microsoft and Unilever, among many others as signatories. The year of 2020 is 10th anniversary since the launch of WEPs.

UN Women is the UN organization dedicated to gender equality and the empowerment of women. A global champion for women and girls, UN Women was established to accelerate progress on meeting their needs worldwide. Working in China since 1998, UN Women provides technical and financial assistance to innovative programmes and strategies for gender equality and women's empowerment.

About the Delegation of the European Union to China

Established in 1993, ThoughtWorks is a global software consulting company with excellent delivery record. Targeting at clients which are leading players in the world, our services include organization transition advisories, innovative software delivery, UE design and product solutions. ThoughtWorks has a global client base with leading companies in industries like automobile, finance and insurance, healthcare, tourism, transport, retails, e-commerce, energy and public utilities.

Around the world ThoughtWorks has 43 offices in 14 countries with more than 7,000 employees on board. It entered China in 2004 and today has more than 2,000 employees based respectively in 7 cities in Beijing, Hong Kong, Xi'an, Chengdu, Shanghai, Wuhan and Shenzhen.