MACAO, Dec. 2, 2020 /PRNewswire/ -- The 11th International Infrastructure Investment and Construction Forum (The 11th IIICF), hosted by the China International Contractors Association (CHINCA) and the Macao Trade and Investment Promotion Agency, grandly opened on December 2 in Macao. Ho Iat Seng, Chief Executive of the Macao SAR; Wang Bingnan, Vice Minister of Ministry of Commerce of the People's Republic of China; Fu Ziying, Director General of the Liaison Office of the Central People's Government in the Macao SAR; Wang Dong, Acting Commissioner of the Ministry of Foreign Affairs of the People's Republic of China in the Macao SAR; Kou Hoi In, President of the Legislative Assembly of the Macao SAR; Lei Wai Nong, Secretary for Economy and Finance of the Macao SAR Government; and Raimundo do Rosario, Secretary for Transport and Public Works of the Macao SAR Government started the forum along with 32 foreign diplomatic envoys in China and heads of international financial institutions. 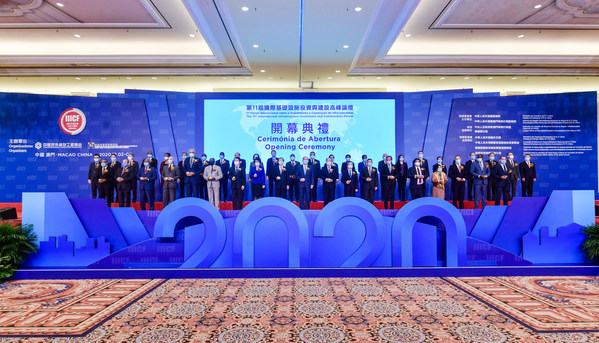 As the world's most influential event of infrastructure field in 2020, the 11th IIICF attracted over 1,000 industrial elites of over 400 enterprises and institutions from more than 40 countries and regions, including 32 foreign diplomatic envoys in China, high-level managements of over 20 international financial institutions and over 60 giants among ENR Top 250 International Contractors, as well as senior executives of enterprises in sectors such as equipment manufacturing, international consulting and engineering service, etc.

Themed on Responding to Challenges and Promoting Global Infrastructure Development, the Forum plays a positive role in restoring confidence and building consensuses to address challenges commonly and promote the high-quality development of the industry.

Meanwhile, combined with the strong support of the Central Government, and the concerted efforts of the Macao SAR Government and relevant cooperative parties, the Forum has developed an important platform through which Macao participates in the construction of the "Belt and Road" and the cooperation in Guangdong-Hong Kong-Macao Greater Bay Area.