SHENZHEN, China, Dec. 12, 2019 /PRNewswire/ -- WeSure, Tencent's insurance platform celebrated its second anniversary with an event themed Tech for Social Good, Insurance for Everyone in Beijing on November 28. WeSure released its operational results for the last two years. WeSure now boasts a user base of more than 55 million, and has insured over 25 million users. Average premium per person exceeds 1,000 yuan, with a 40% renewal rate. 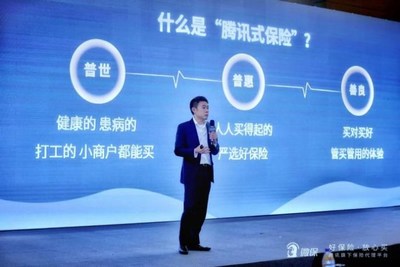 WeSure CEO Alan Lau said: "As the insurance platform of Tencent, WeSure is committed to provide universal, affordable and user-friendly insurance services to more than 1 billion WeChat users. Our approach is rooted from Tencent's core value of Tech for Social Good. WeSure's vision is to become the reliable insurance platform for hundreds of millions of families in China, providing reliable insurance coverage throughout the different stages of their lives."

Providing policyholders with insurance coverage for the duration of their lives via universal, affordable and user-friendly insurance products modeled on Tencent's customer-first approach.

Since its inception in Nov 2017, WeSure has witnessed the great contribution that the Internet has made to the growth of the insurance industry. The popular online insurance scheme, one million yuan healthcare program, is gaining popularity across the country. Its penetration rate has reached 8% over the last three years (2016-2019), while the user base of has grew to nearly 100 million during the same period.

Despite the rapid growth of the online insurance sector, there are still many pain points among the general Chinese population, including low penetration rate, insufficient coverage and a distrust of insurance services.

Providing affordable schemes to the public via universal insurance coverage

Based on the principle of universal insurance coverage, WeSure has been dedicated to providing affordable insurance schemes to everyone. WeSure is the first company to launch the Anti-Cancer Specialty Drug Protection Plan in China, named Yaoshenbao, through a tie-up with partners in the insurance, healthcare and financial sectors. WeSure worked with partners to integrate comprehensive insurance and healthcare benefits in this program, including payment in installments, donations, discounts, and guaranteed coverage for treatment, giving both healthy people and cancer patients the help they value most.

In addition, WeSure has partnered with WeChat Pay and PICC to launch dozens of insurance plans for the country's tens of millions of small merchants who are linked up to WeChat Pay. Based on the real-world operational scenarios of small merchants and low number of merchants who have coverage, WeSure now provides the merchant with a plan that includes a cyber safeguard around the collection and processing of payments, fire insurance, business insurance as well as protection against physical damage to their place of business. The firm has provided over 3 million small and medium-sized merchants with protection in terms of financial, asset and personal security.

WeSure has also expanded its coverage to include scenarios such as Tencent Mobile Top Up, Medical Payment and Bus Barcode. WeSure is now accessed by 400 million monthly active scenario-based WeChat service users, and plans to expand the concept of insurance into more WeChat scenarios, including electronic toll collection (ETC) and Tencent Health, giving WeChat users protection across all aspects of their lives and lifestyles.

Rather than leaving the policyholder to figure out everything on their own, in March 2019, WeSure's "butler-style" service went online, offering one-on-one communications with a real human being throughout the entire service process, from insurance purchase to claims settlement. WeSure's service people will proactively assist an user to file a claim through every step of the process. The approach has enabled policyholders to truly enjoy complete, convenient and transparent services after signing an insurance contract. According to official data, such butler-style service has assisted 65% of policyholders in handling claims, helping them collect compensation worth millions of yuan. As of November 2019, WeSure had dealt with 280,000 claims worth 680 million yuan.

As for product experiences, WeSure has continued to enrich features for policyholders including AI-powered recommendations, one-click termination of insurance contracts and a well thought-out process to minimize anxiety during the shopping process based on the needs of different user groups, enabling users to buy products that best fit their needs.