SHUNDE, China, June 11, 2020 /PRNewswire/ -- On June 11, Shunde, a district of Foshan city in China's Guangdong province, released the construction plan for ten ultra-large modern thematic industrial parks with new development philosophy, and interpreted related supporting policies. According to the Information Office of the People's Government of Shunde District, the total area of these ten industrial parks exceeds 32,000 mu (2133.33 hectares), each covering an area of over 1,000 mu (66.67 hectares) with a clear leading industry under the guiding principle of "one town with one thematic industry." These parks strive to be built into a new carrier for high-quality development in the Guangdong-Hong Kong-Macao Greater Bay Area. 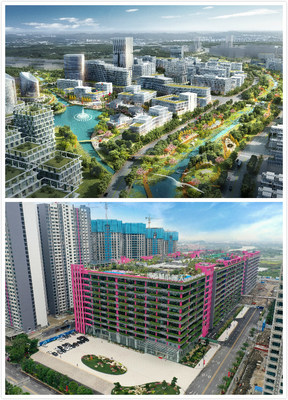 Since 2018, upgrading the village-level industrial parks has been made the top priority of the party committee and government of Shunde district. After two years' hard-work, a total of 2626.2 hectares of land have been consolidated and 282.2 hectares turned into reclaimed and afforested areas. Besides, 11.45 million square meters of new factories have been built and 7,944 backward and unreliable companies closed.

Shunde has been taking the lead in building Guangdong provincial pilot area of systematic and institutional reform and innovation for high-quality development in full swing, and achieved phased results. It is now sparing no effort in planning to build the provincial pilot area with new development philosophy in the new era. At this moment, Shunde makes its global release of the industrial planning for the ten ultra-large thematic industrial parks, aiming to accelerate the construction of the parks in accordance with the new development philosophy, under the principles of setting planning and construction standards, setting industry theme directions, setting enterprise access standards and favorable supporting policies.

With a total area of over 2133.33 hectares and covering large-scale and continuous development space, these ten industrial parks are rarely seen in the Greater Bay Area. The direction of the leading industry in each park is clarified, guided by the principles of "one town with one thematic industry." The proportion of the output value of the leading industry in its total will gradually exceed 60%.

In order to plan and build these modern industrial parks with high standards, Shunde took the lead in formulating standards to guide and regulate the construction. Combining their respective characteristics, Shunde has introduced a package of supporting policies, whose intensity and breadth are nationally competitive, covering the entire process of project implementation. Among them, the most important investment projects in the modern industrial parks will be granted a maximum of 30% subsidy for fixed asset investment; for the strategic emerging industry projects settled in the parks, a maximum of 30% subsidies for R&D investment can be granted for three consecutive years.

According to these policies, it's estimated that the district and township levels will invest more than 4 billion yuan in fund support in the next three years.