SHENZHEN, China, April 30, 2020 /PRNewswire/ -- A news report by Shenzhen Daily on the 5th anniversary of the inauguration of the Qianhai & Shekou Free Trade Area.

Qianhai-headquartered WeBank has grown into a top private bank in China over the past five years since its establishment, servicing over 200 million individual clients with its inclusive financial system.

Set up in December 2014 as one of the country's first private banks and the first Internet-only bank, WeBank has become the world's leading digital bank, as claimed by the Massachusetts-based Forrester Research, one of the most influential research and advisory firms. 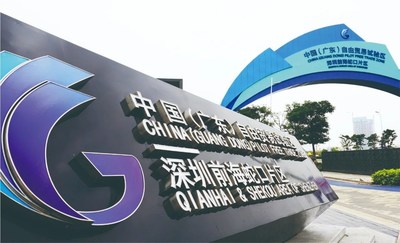 The digital bank would not have made it without the innovation-oriented business environment in Qianhai, part of the China (Guangdong) Pilot Free Trade Zone inaugurated April 27, 2015, said Wan Jun, chairman of the board of supervisors of WeBank.

WeBank is one of the enterprises that have gone through rapid development in Qianhai, which Shenzhen Special Zone Daily said has become the core engine for high-quality development of the Guangdong-Hong Kong-Macao Greater Bay Area, in the past five years.

Official statistics show that the added value of Qianhai-registered enterprises has grown 150 percent over the past several years, while its tax revenue has doubled. The fixed asset investment in Qianhai has gone up 90 percent, and it contributed 2.4 percent of the 2019 GDP of Guangdong Province. The 2019 Guangdong GDP topped the nation at 10.77 trillion yuan.

Qianhai has reported a 152 percent growth in foreign trade over the past five years. The total volume of imports and exports in its Qianhaiwan Bonded Free Trade Port Area reached 128.55 billion yuan last year, up 233 percent from 55.2 billion yuan in its inaugural year.

Liu Yuli, deputy general manager of YHGlobal based in Qianhaiwan port, said her company recorded over 200% year-on-year growth in the first quarter of the year despite the economic uncertainty caused by the COVID-19 pandemic.

The total volume of imports and exports of YHGlobal, a Hurun-listed unicorn engaged in the global supply chain, reached 59.4 billion yuan last year, topping Shenzhen's supply-chain enterprises and ranked No. 13 nationally, according to Liu.

She attributed the eye-catching growth of YHGlobal to a series of innovative customs policies adopted to facilitate cross-border trade.

Liu said Shekou Customs has created many other favorable policies to address the actual needs of importers and exporters within their business operations, which also helps them lure more new clients.

The high-quality economic development in Qianhai is due in large part to institutional innovations that the Qianhai authority has committed to since its establishment.

According to official statistics, Qianhai has rolled out 106 institutional innovations last year, bringing the total number to 520 in five years' time. Of them, 50 have been promoted nationwide, five in the Greater Bay Area, 69 in Guangdong Province and 166 have been duplicated for use in Shenzhen.

Qianhai has topped the country for the past two consecutive years in the national innovation index compiled by the Guangzhou-based Sun Yat-sen University.

Efforts by the Qianhai authority to create a fair, transparent business environment has paid off. The actual use of foreign investment in the free trade area has grown 187 percent in five years, accounting for 21 percent of the total foreign investments made in Guangdong last year, up from the 8.3 percentage points in the first year of its establishment.

Qianhai was ranked 51st in the world business environment list by PricewaterhouseCoopers in 2017, then jumped to 31st in 2018 and 23rd last year.

Over the past five years, a total of 59 new roads, 36 kilometers in length, have been opened to traffic and 179 new office buildings have been put into use, offering companies 3.13 million square meters of office floor space in Qianhai.