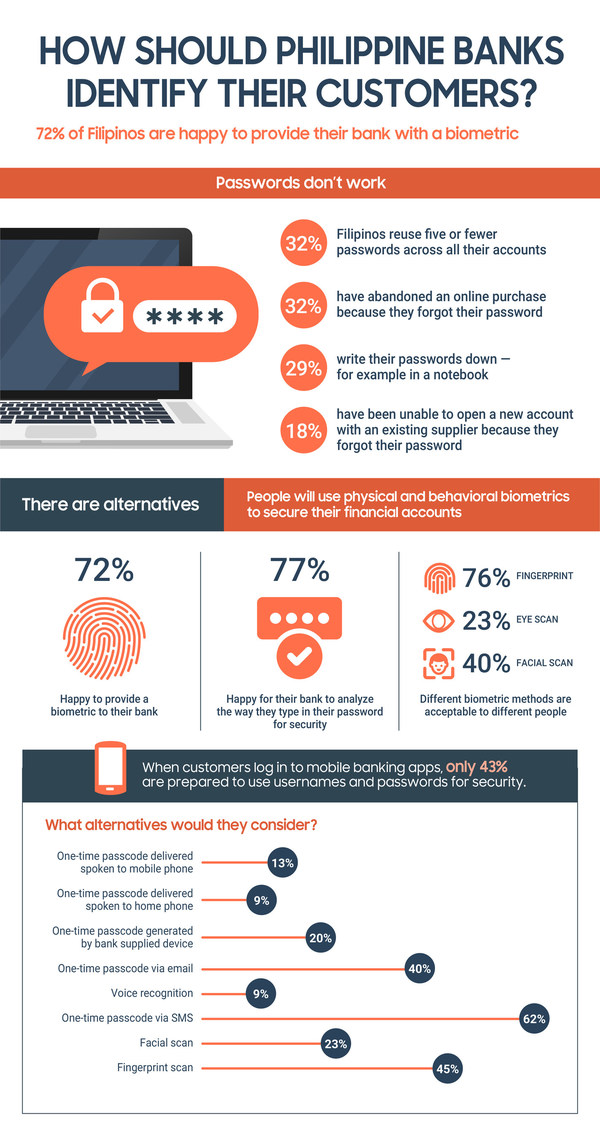 FICO, a global analytics software firm, has released its Consumer Digital Banking Survey, which found a notable percentage of Filipinos are not taking the necessary precautions to protect their passwords and logins when banking online.

The study found that only 53 percent are using separate passwords to access multiple accounts; 18 percent have between two to five passwords they reuse across accounts; and a staggering 14 percent use a single password across all accounts. Additionally, 15 percent of respondents use an encrypted password manager -- which many consider best practice -- while 29 percent adopted risky approaches to recall passwords, such as writing them down in a notebook.

"As the pandemic drives take-up of online services by consumers, criminals are preying on this reliance and targeting consumers with malicious activities such as phishing and social engineering," said Subhashish Bose, FICO's lead for fraud, security and compliance in Asia Pacific. "With social distancing restrictions in the Philippines still in place, most Filipinos are only able to access their finances digitally, so it's essential for them to educate themselves and adopt security best practices."

FICO's study shows that consumers struggle to recall their current passwords. Nearly a third of respondents (32%) reported that they have abandoned an online purchase because they forgot the login information, and 30 percent saying they were unable to check an account balance. Forgotten usernames and passwords also affect new account openings, with 18 percent saying that it has stopped them doing so with an existing provider.

This is noteworthy as consumers are more willing than ever to bank online. The study found that 76 percent of Filipinos say they would open some kind of financial account online, such as personal loans (33 percent), credit cards (38 percent) and everyday transaction accounts (40 percent).

Filipinos have at the same time become more accepting of biometrics, with the study revealing that 72 percent are also happy to provide this information to their bank. The use of fingerprints was the most widely accepted approach (76 percent), facial scans came second (40 percent) and eye scans came in third (23 percent). A more popular alternative with Filipinos was analysis of how they type in their password (77 percent), a technique known as behavioural biometrics.

The survey also asked Filipinos about the current security used when logging into their mobile banking apps beyond traditional usernames and passwords. The five most widely used security alternatives were:

"It's very important for consumers to protect themselves from online scams and fraud," said Bose. "Filipinos recognize that usernames and passwords are old technology, with only 43 percent prepared to use them when logging into mobile banking apps. They are willing and ready to adopt additional biometrics to secure their accounts. Financial institutions that can adopt more secure authentication technologies will be seen as trustworthy market-leaders in the Philippines."

FICO's Consumer Digital Banking Survey was produced using an online, quantitative poll of 5,000 adults (over 18) across ten countries carried out on behalf of FICO by an independent research company. The countries surveyed were: Brazil, Canada, Germany, Malaysia, Mexico, Philippines, Sweden, Turkey, UK and the USA.

About FICO
FICO (NYSE: FICO) powers decisions that help people and businesses around the world prosper. Founded in 1956 and based in Silicon Valley, the company is a pioneer in the use of predictive analytics and data science to improve operational decisions. FICO holds more than 195 US and foreign patents on technologies that increase profitability, customer satisfaction and growth for businesses in financial services, manufacturing, telecommunications, health care, retail and many other industries. Using FICO solutions, businesses in more than 100 countries do everything from protecting 2.6 billion payment cards from fraud, to helping people get credit, to ensuring that millions of airplanes and rental cars are in the right place at the right time.