20% of people said they don't currently use them but plan to in the next year, Covid-19 concerns could accelerate adoption

If you are unfamiliar with digital currencies, you are in the minority. A full 85% of survey respondents of global consumers have owned, used or heard of decentralised digital currency such as a cryptocurrency according to an Economist Intelligence Unit survey conducted over January and February of this year. The study, Digimentality—Fear and favouring of digital currency, sponsored by Crypto.com, also showed that in the developing world, awareness reached 92%. 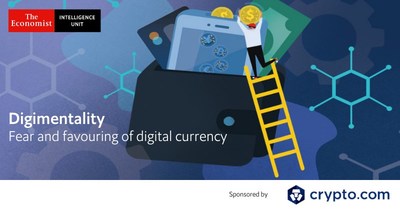 The study underscored a trend that is likely to accelerate as Covid-19 concerns mount and governments take physical cash out of circulation to help stem the virus spread. The global survey suggests that societies across the world were already leaning toward cashless options for daily purchases, based on convenience and traceability reasons.

"Our report showed that while the use of cryptocurrencies amongst the general public is low, people are very curious and optimistic about them for the future," said Kris Marszalek, CEO of Crypto.com. "This bodes very well for our industry and comes at a pivotal time when trust in financial markets is wavering and more people are turning their attention to the growing range of digital currencies that continue to present a clear plan B to our traditional financial structures. We still have much work to do to get crypto into every wallet, but that mission is much more difficult without valuable insights into what the general public is thinking."

"Covid-19 wasn't part of the original survey parameters since it didn't exist at the survey's onset," explains Jason Wincuinas, senior editor for thought leadership with the Economist Intelligence Unit, who headed the research. "But we can see in events since the survey finished in February—such as debate in the US congress over introducing a 'digital dollar' in recent weeks—that this is becoming a structural concern for society. What's interesting is how China and Sweden were already looking at digital currency as potential pillars of their monetary systems. For other countries, maybe it takes an emergency like covid-19 to move the needle."

In the survey, physical credit cards were shown to be the most popular payment choice overall; cash was only the third most used option. Online banking, online payment services and mobile apps on smartphones all captured a large share of consumer transactions. Digital currencies (which includes cryptocurrencies such as Bitcoin, Ether, XRP, etc) were still the least cited option but they captured the largest share of respondents who said they planned to try it within the next 12 months.

For expert analysis, The Economist Intelligence Unit consulted Eva Julin, deputy head general secretariat at Sveriges Riksbank (Sweden's Central Bank), who heads the bank's evaluation of issuing a digital currency and Antony Lewis, fintech advisor to The Securities and Futures Commission (SFC) of Hong Kong and author of the book "The Basics of Bitcoins and Blockchains: An Introduction to Cryptocurrencies and the Technology that Powers Them.

Commenting on the research, Mr Wincuinas said: "The trend toward cashless payments is an irresistible force. And it was very interesting to observe greater eagerness and expectations within the developing economies we tested. Given that these countries also tend to have higher rates of people using mobile devices to go online and younger populations—who also tend to have faster takeup of technology generally—it could be a harbinger of what's to come with digital currencies. Combined with the fact that we saw more resistance to cryptocurrencies and digital payments in developed economies, I think it's clear there could be another leap-frog effect in the waiting as economies like China push ahead with digital ways to pay, and economies with older payment infrastructures play a wait-and-see game. But covid-19 could change everything."

Digimentality—Fear and favouring of digital currency is a report from The Economist Intelligence Unit, sponsored by Crypto.com, exploring the extent to which digital payments are trusted by consumers and what barriers may exist to basic monetary functions becoming predominantly electronic or digital. The analysis is based on a survey of 3,048 people conducted in January and February 2020. About half of the respondents came from developed economies and half from developing ones. All respondents had bought a product or service within the past 12 months using some kind of digital payment.

About Crypto.com
Crypto.com was founded in 2016 on a simple belief: it's a basic human right for everyone to control their money, data and identity. With over 1 million users on its platform today, Crypto.com provides a powerful alternative to traditional financial services, turning its vision of "cryptocurrency in every wallet" into reality, one customer at a time. Crypto.com is built on a solid foundation of security, privacy and compliance and is the first cryptocurrency company in the world to have CCSS Level 3, ISO27001:2013 and PCI:DSS 3.2.1, Level 1 compliance. Crypto.com is headquartered in Hong Kong with a 250+ strong team. Find out more by visiting https://crypto.com.

About The Economist Intelligence Unit

The EIU is the thought leadership, research and analysis division of The Economist Group and the world leader in global business intelligence for executives. We uncover novel and forward-looking perspectives with access to over 650 expert analysts and editors across 200 countries worldwide. More information can be found on www.eiuperspectives.economist.com. Follow us on Twitter, LinkedIn and Facebook.