JINAN, China, Nov. 26, 2020 /PRNewswire/ -- The "Connecting Shandong with Fortune Global 500" series of events with five special sessions in Europe, ASEAN, the United States, South Korea and Japan have been successfully staged from August 27 to November 10. The activities were hosted by the CPC Shandong Provincial Committee and Shandong Provincial People's Government, and supported by the Ministry of Commerce and the Ministry of Foreign Affairs. Themed on "Deepen Communication and Achieve Win-win Cooperation," the event was carried out mainly online plus some offline activities. The five special sessions were broadcasted live globally in multiple languages covering the world's major economies, thus enhancing the strategic communication and result-oriented exchanges between Shandong Province and Fortune 500 multinationals and its major economic and trade partners at national or regional levels. 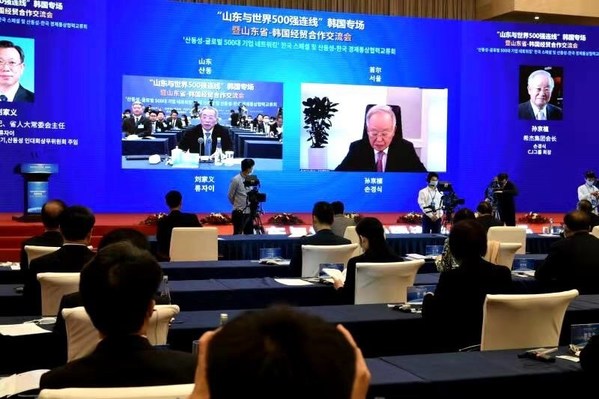 Officials of the CPC Shandong Provincial Committee and Shandong Provincial People's Government attended throughout the activities. Fifty-nine high-level guests from 14 countries and regions delivered speeches or participated in the dialogues at the main sessions. The majority of them were the 38 business leaders, including presidents and chairmen, 5 vice presidents responsible for the global market and 10 presidents responsible for the China market from 11 Fortune 500 companies such as Glencore, Heraeus, Wilmar International, Charoen Pokphand, Air Products, CJ, SK, Sumitomo Corporation, Marubeni, Mitsubishi UFJ, among others. In addition, 4 foreign ministerial dignitaries from Japan, Korea, Singapore and Cambodia, 2 Chinese ambassadors to Japan and Singapore, 1 Korean ambassador to China, and 7 guests from the Association for the Promotion of International Trade, Japan as well as other famous business associations took part in the events.

In addition to the main activities, the Shandong-Korea Economic and Trade Cooperation Conference and the Investment Promotion Conference for the Industrial Chain with Japan were held concurrently during the five sessions, focusing on the advantageous industries of Japan and South Korea with topics such as targeted investment and matching negotiations.

With a focus on high-end cooperation in the industry chain, targeted investment and project promotion negotiations were conducted regarding the global multinational corporations. A total of 64 projects were signed during the five sessions, with the total investment amounting to US$3.7 billion, including US$1.19 billion of foreign investment, covering industries such as high-end equipment manufacturing, new materials, medical and health care, high-end chemicals, modern services, modern finance, modern efficient agriculture, modern logistics, and biotechnology.