"We are delighted to have made a new discovery at the south western extension of the Palestina intrusion. The nickel and precious metals mineralization identified is located just 26km from the Santa Rita Mine - well within trucking distance of our existing site infrastructure.

This discovery is testament to Atlantic Nickel's exploration team and further confirms our confidence in the business' potential to generate strong investor returns and benefit from the growth in electric vehicles.

We are assessing the potential for the discovery at Palestina to support open pit resources. We also continue to evaluate our six regional targets, Santa Maria, Aiquara, Ponto Novo, Machadinho, Ibicui and Ibitupa for additional follow up work - including drilling in 2021"

The Palestina prospect is located 26km to the south west of Santa Rita and is easily reached by secondary roads, with final access provided by local community tracks and drill roads prepared by the company. 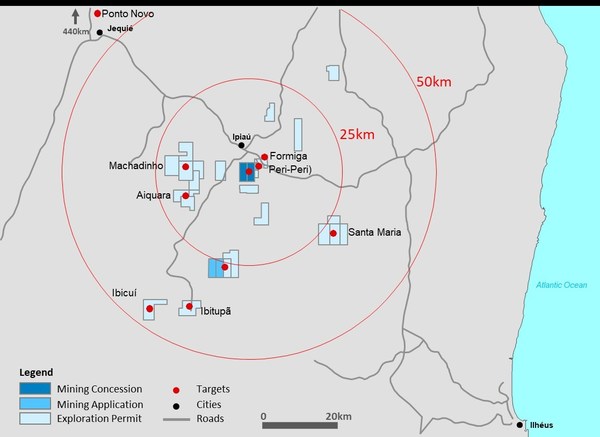 The project is located on two mining licence applications submitted by the company to the Brazilian Mining Agency in July 2019.

Palestina is located on the same geological belt as the Santa Rita Mine, namely Itabuna-Salvador-Curaça Belt ("ISC"), the same belt that has drawn the attention of Rio Tinto, Ero Copper and Largo Resources. AN controls eight prospects on thirty-three exploration permits in the district, covering 371km2.

The belt covers Archean and Paleoproterozoic rocks that have been intruded by a series of intrusive rocks that form mafic-ultramafic complexes (MUC) of varying sizes. These intrusives are the host to magmatic sulphide deposits such as Santa Rita and the orebodies in the Curaca valley that are operated by Ero Copper.

In most cases the mineralisation hosted in these mafic-ultramafic complexes is dominated by nickel with varying by-product copper, cobalt and platinum group elements. In some cases, such as Ero's Caraiba deposits the mineralization is dominated by copper.  Other magmatic sulphide Nickel-Copper_PGE deposits include world class mines such as Norilsk, Sudbury, Voisey's Bay and Duluth. These deposits commonly host large volumes of disseminated sulphide mineralisation but also contain significant zones of very high grades of massive sulphide accumulation. Potential for these exist also at depth at Palestina and at Santa Rita.

AN's 2020 drilling program was designed to follow up historic drill intercepts of nickel-sulphide mineralisation identified by the previous operator. AN's work program targeted new areas of the intrusion, where the basal pyroxenite unit surfaces and shows a coincident elevated nickel in soil geochemical anomaly. The disseminated nickel and copper sulphides are hosted predominantly in a pyroxenite unit at the base of the intrusive complex. 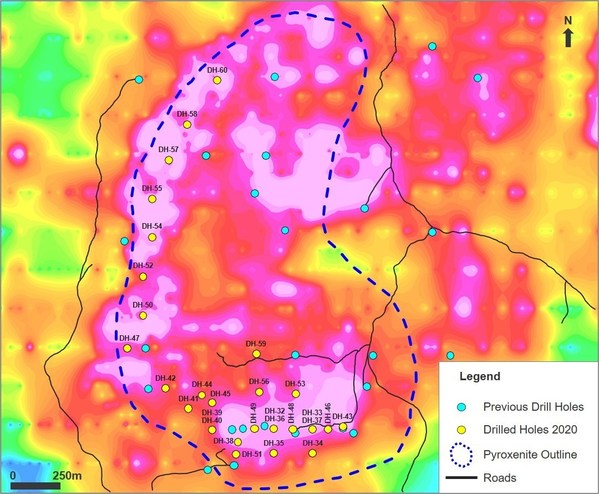 Figure 2: Map showing historic holes, as well as 2020 completed holes mostly focusing on the south west extension. The dashed blue line shows the contact of the pyroxenite unit with the basement gneisses. The background is an image of the systematic nickel in soil geochemistry.

Infographic - https://mma.prnasia.com/media2/1324646/appian_figure_2_infographic.jpg?p=medium600
Figure 2: Map showing historic holes, as well as 2020 completed holes mostly focusing on the south west extension. The dashed blue line shows the contact of the pyroxenite unit with the basement gneisses. The background is an image of the systematic nickel in soil geochemistry. 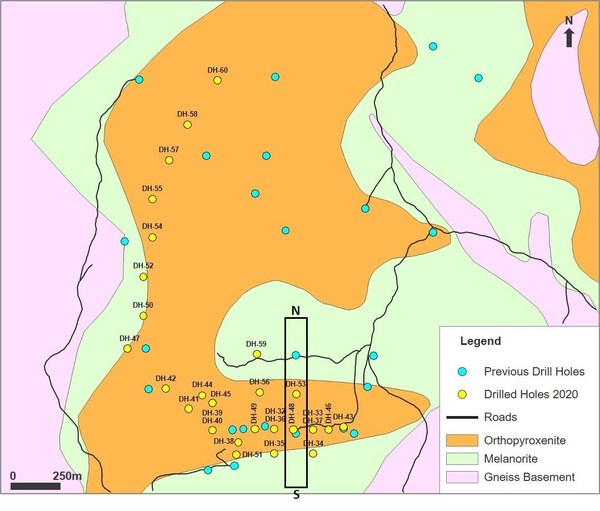 One important difference to the Santa Rita nickel sulphide mineralisation are the significantly higher platinum group element grades at Palestina, specially palladium. The host lithologies at Palestina are also lacking the very high olivine content dunites, which is expected to result in a materially lower MgO content. 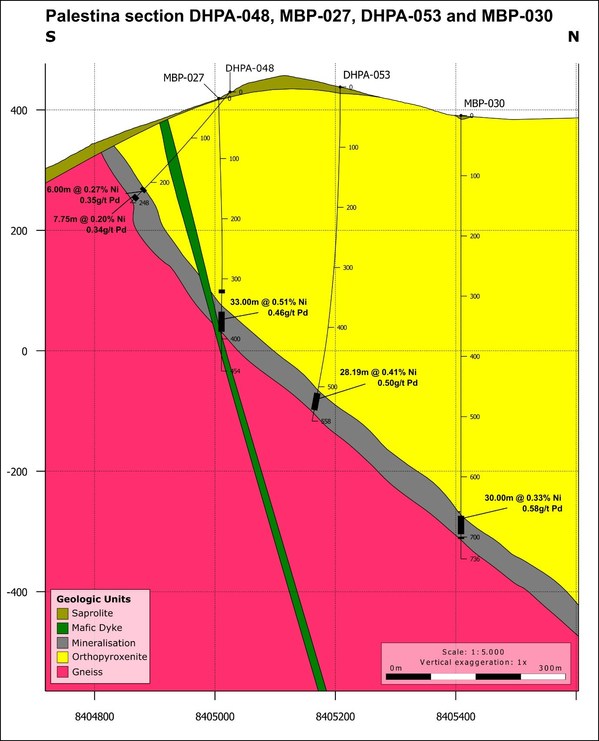 Figure 4: South-north geologic section showing simplified geology along with historical holes 27 and 30 and 2020 holes 48 and 53. 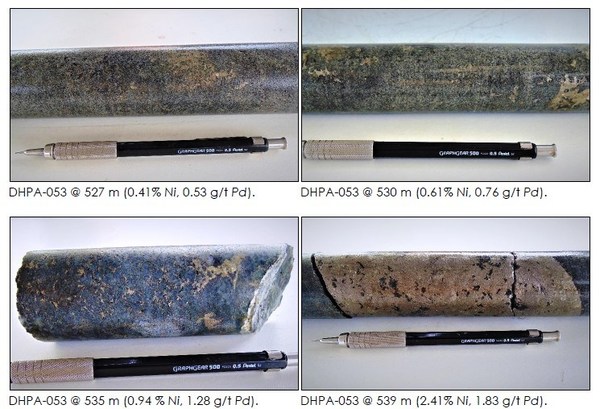 The drilling campaign is managed by AN personnel based in Ipiau, a regional centre close to the Santa Rita mine. Smaller towns are located within 10km of the drill site and these provide locations for field accommodation and provisioning logistics.

Drilling is contracted out to Energold's Brazilian subsidiary which is providing high performance, light weight, man portable drill rigs and experienced drill crew. The use of these rigs ensures that AN can operate under with a minimal environmental footprint during the early exploration phases.

Drill core is logged and sampled at AN's exploration core facility in Ipiau. Samples are shipped to ALS Chemex in Belo Horizonte where they are crushed and pulverized. A 200g split of the Pulp is then shipped to ALS's laboratories in Lima or Vancouver where a comprehensive list of analysis is carried out including analysis for sulphide nickel content, gold and PGE analysis as well as major element analysis. Core samples are 100% crushed -2mm and a 250g aliquot is pulverized to -200# for assaying. Nickel sulphide leaching with ammonia citrate/hydrogen peroxide with ICP-AES reading. Gold and PGE determined by fire assay and ICP-AES reading. Base metals and major elements are four acid leached with ICP-AES reading.

The results received from the 2020 program to date are listed in table 1 below. The intercept width and grades are broadly in line with what early stage historic drilling at Santa Rita, except for the much higher PGE grades at Palestina.

Table 1: Drill intercepts received to date from the 2020 drilling program at Palestina.

Significance of Results and Next steps

The program at Palestina was designed to provide an initial evaluation of the open pit nickel sulphide resource potential, that could be exploited as a satellite operation to provide additional mill feed to the Santa Rita Mine. The prospect is well within trucking distance to the site infrastructure.

Drilling to date has been wider-spaced at between 100 and 200m, aimed at tracing out the mineralised envelope near surface and down dip. A number of holes have been completed to intercept the mineralisation at depth, these generally show an increase in grades and width with some intervals of higher grade massive sulphide mineralisation, including holes 53 and 56.

AN is currently completing geological modelling and developing a block model to evaluate the exploration potential for open pit resources. This will help define the next phase of infill and extension drilling to arrive at a mineral resource estimate.

The deeper holes are of significant wides and grades and warrant further follow-up and evaluation with the view of defining potential underground mining targets. To this effect AN is planning a program of down hole EM to evaluate the deeper holes for conductor panels that may identify associated areas of massive sulphide mineralisation. Deeper holes are also being considered to test the base of the bowl-shaped intrusion for massive sulphide accumulations.  Finally, AN is also evaluating its other six regional targets, Santa Maria, Aiquara, Ponto Novo, Machadinho, Ibicui and Ibitupa for additional follow up work including drilling in 2021.

Appian Capital Advisory LLP is the investment advisor to long-term value focused private equity funds that invest solely in mining and mining related companies. Appian is a leading investment advisor in the metals and mining industry, with global experience across South America, North America, Australia and Africa and a successful track record of supporting companies and the advancement of their projects into production. Appian acquired Atlantic Nickel, the 100% owner of Santa Rita, in 2018.

Atlantic Nickel is the owner and operator of Santa Rita, an open-pit nickel-copper-cobalt sulphide operation located in Bahia, Brazil. Santa Rita is a fully permitted, past-producing nickel mine currently undergoing an operational restart. The Mine benefits from US$1bn of prior investment and has an estimated production capacity of 6.5 Mtpa. One of the largest open pit nickel sulphide mines in the world, Santa Rita is a high-quality asset operating with a first quartile cost position. It is one of a few remaining nickel sulphide mines globally that can offer additional supply towards the production of Class I nickel products and exposure to the high-growth potential of the electric vehicle industry.