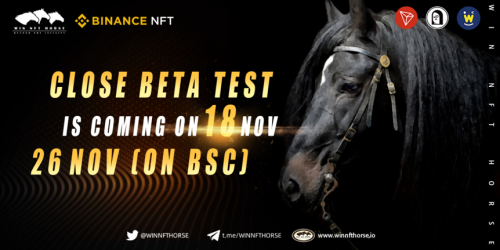 The goal of the close beta test is to get as much feedback to improve the game function to present the best use experience for players.

In the close beta phase, users can purchase mystery boxes at the lowest price on the official marketplace of WIN NFT HORSE. Offer is subject to availability. When the game goes live, this price will inevitably be adjusted, and users will no longer be able to buy the mystery boxs at the price of the close beta stage.

WIN NFT HORSE promises to enable users to benefit and be the first of its kind on the blockchain.

Participants who are lucky enough to receive the mystery box will be able to participate directly in the game's beta. A mystery box represents a racehorse, and the test version of the racehorse will be used directly after the game is officially launched.

The launch of WIN NFT HORSE close beta test marks the full transition from beta to official release. Meanwhile, WIN NFT HORSE has always been committed to benefiting its users and establishing itself as the leading Gamefi product in the blockchain space.

Note：This test is a close beta test. All data in the game (except NFT horses) will be deleted after the game is officially launched.

The latest news can be obtained from the following sources: