HANOI, VIETNAM - Media OutReach - 17 February 2022 - The VinFuture Prize has officially opened the nomination portal for the second season from February 16th until May 17th, 2022. The 2022 season of VinFuture Prize is looking for scientific inventions and innovations that can help revive the world and build up sustainable development after the pandemic. 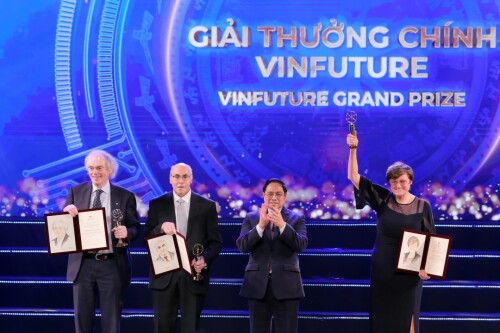 The Laureates of the VinFuture Grand Prize 2021

Following the success of the inaugural VinFuture Prize with 4 honored breakthroughs in science and technology that can positively impact humanity on a global scale – The second season of the Prize has been launched and welcomed by the international community of science.

The focus of the VinFuture Prize's second season is to honor outstanding scientific innovations that can help reimagine post-pandemic life and stimulate sustainable development. This reflects VinFuture's consistent vision and mission of  "Science for humanity". If health protection was the challenge of mankind in 2021, "Reshaping and Reviving" is the imperative that the world needs to cope with in 2022.

Centering around the theme of "Reshaping and Reviving", the second season of the VinFuture Prize hopes to motivate and inspire scientists around the world. Through the Prizes, VinFuture wishes to support people to overcome topical post-pandemic challenges and create positive changes for millions of human lives on earth this year.

Commenting on the outstanding nominations of 2021 and looking forward to this year's submissions, Prof. Sir Richard Henry Friend – Chair of the VinFuture Prize Council, said: "Last year's prize awards celebrate very clearly how science and innovation can bring real global benefits for health. However, humankind faces big challenges in many other areas, including natural resource consumption, the move to zero carbon to avoid damaging climate change, and others. This year we want to reach as widely as we can, across disciplines and across continents, to broaden the scope and impact of the VinFuture Prizes in reviving the post-pandemic world."

To be eligible for participating in the VinFuture Prize 2022, the applications are required to meet the nomination criteria* and be nominated by reputable organizations/individuals in the field of science and technology around the world. Nominations will be evaluated in the pre-screening and selection stages by the Pre-screening Committee and the VinFuture Prize Council respectively. Members of the Prize Council and Pre-screening Committee are top global scientists, inventors and laureates of the Nobel Prize, Turing Award, Millenium Technology Prize, and other global awards.

Sharing about the expectations for the call for nominations of the second VinFuture Prize season, Prof. Văn-Chí Đặng, Scientific Director of Ludwig Cancer Research Institute (USA) and a member of the VinFuture Prize Council, said: "Science and technology is the answer to the challenges and urgent global problems that people are facing. In order to have more inventions that help change people's lives regardless of origin, skin color, or ethnicity, for this year's Prize, we expect to receive more exceptional scientific solutions, in more diverse fields, across more geographical areas, and from scientists regardless of age, gender, or nationality,... with the potential for application on a larger scale."

The inaugural VinFuture Prize received tremendous support from the global scientific and technological community, with 599 quality nominations from scientists, researchers, and innovators from six continents. The VinFuture Grand Prize, valued at US$ 3 million, was awarded to a group of three scientists: Dr. Katalin Karikó (USA), Prof. Drew Weissman (USA), and Prof. Pieter Cullis (Canada) for the development of mRNA technology, paving the way for the production of effective vaccines to help prevent COVID-19 outbreaks. The VinFuture Special Prize for Innovators with Outstanding Achievements in Emerging Fields was awarded to Prof. Omar Yaghi (USA) for his pioneering work on the discovery and development of metal-organic framework materials (MOFs). The VinFuture Special Prize for Female Innovators was awarded to Prof. Zhenan Bao (USA) for the scientific advancements from her pioneering work on developing skin-inspired organic electronics materials. The VinFuture Special Prize for Innovators from Developing countries was granted to two scientists from South Africa, Prof. Salim Abdool Karim and Prof. Quarraisha Abdool Karim, whose research helps prevent HIV transmission and lessen the burden of the AIDS epidemic.

For more information about the Prize:

*The ten major nomination criteria of the VinFuture Prize are:

1.     There should be clear evidence, or potential, for an end-product or service based on the solution, which has an everyday practical application;

3.     Solutions should be aligned with one or more of the United Nation's SDGs;

4.     Solutions must be scientifically proven (i.e., there should be clear evidence of passing relevant scientific trials, and in the case of research, it must be empirically proven or widely reviewed);

5.     Open to researchers or inventors who were involved in developing the underlying solutions, and not entrepreneurs or corporates who helped in the commercialization/diffusion of the technology;

6.     End-products of the research should benefit people globally, including those from developing and less developed countries, as well as lower-income and disadvantaged communities;

7.     Open to individuals or teams of researchers/inventors;

8.     Preferences are considered for nominees in the active stages of their careers;

9.     A nominator can only nominate one nominee/one group of nominees for each of the four Prize categories.

10.  Research/Solution/Invention can be underpinned in any discipline of science, engineering, or technology, including potentially multi-disciplinary approaches.

The Foundation was established to honor and facilitate breakthrough scientific research and technological innovations that have already contributed or have the potential to contribute to the betterment of life for millions of human beings globally while creating a more sustainable world for future generations.

The VinFuture Prize consists of four prize categories, of which the Grand Prize – with a value of US$3 million – is one of the largest annual global prizes, and three additional Special Prizes, worth US$500,000 each, are dedicated to Female Innovator(s), Innovator(s) from Developing Country(ies), and Innovator(s) with Outstanding Achievements in Emerging Fields.

In addition, the Foundation also conducts many activities to realize its mission, such as funding research, collaborating in academic development, and promoting STEM education.