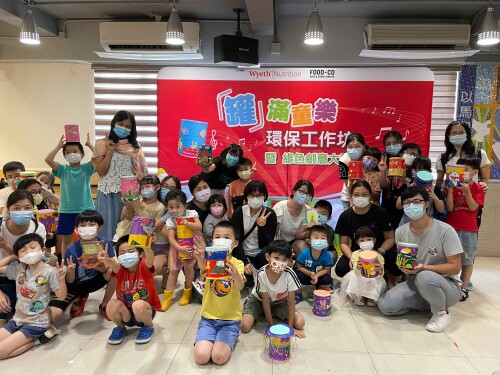 Photo caption: These photos showed the first two Green Music workshop this year, during which all participating families were excited. 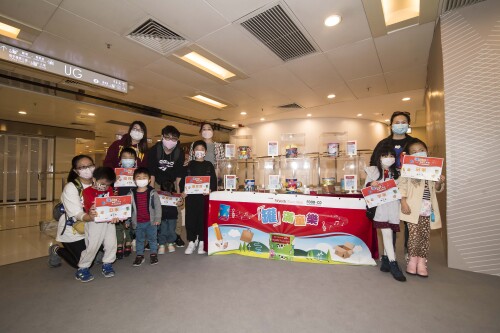 Photo description: This photo showed the prize ceremony of the Green Music Campaign competition this year. Look how happy the winners were.

This August, Wyeth Nutrition Hong Kong kick-started the third Green Music Campaign together with St James' Settlement FOOD-CO and arranged 4 tutor-led workshops which encouraged kids to make good use of their creativity to upcycle milk powder cans into music drums. The 4 workshops attracted more than 50 families and 70 children to participate and have collected more than 70 products for the competition. The judging panel of the competition has finished the judging process in October, with representatives of Wyeth Nutrition Hong Kong and St. James' Settlement jointly selected the champion, first runner-up, second runner-up and five merit winners, whose products are environmentally friendly, creative and aesthetic. The prize ceremony was successfully held last Saturday (December 18) and the winning products were exhibited at the same venue. The "Wyeth Nutrition x FOOD-CO Sharing Day" was also held on the same day, arranged five workshops in total with two drawing workshops and three Green Music workshops to promote green living.

Mrs. Lau, parent of the Champion of the competition, said: "Very happy to participate in the Green Music workshop. Both my daughter and myself find the activity really meaningful as it strengthens our mother-daughter relationship while promoting the idea of green living, suggesting ways for us to protect the environment after consuming the products."

Mr. Mok, parent of the Merit award winner of the competition, said: "I hope that this milk powder can drums can help children to learn more about environmental protection, as we were able to upcycle and reuse with just a little bit of creativity. The workshop also encourages preservation of earth's resources while enhancing family quality time."

In order to promote the integration of environmental protection into everyday life, Wyeth Nutrition Hong Kong launched the Green Music Campaign series first in 2019 which aim to engage kids and parents in a fun way to recycle/upcycle/repurpose used milk powder cans. The first event was a music workshop, where children were taught to use the upcycled music drums to play different kinds of music. The three music workshops have successfully recruited more than 120 children and parents to participate and shared the fun of music-playing together.

The second year of the Green Music Campaign was moved online. The online workshops first started with a short tutorial video for parents and children to upcycle milk powder cans and some household items into musical instruments by themselves. The tutor then taught some simple songs for the families to perform together at home. The videos have attracted more than 170,000 views, 360 comments and 324 shares on social media, successfully combined environmental protection and music again to promote the importance of environmental protection to children in a fun and engaging way.

Ms. Traci Chow, Business Executive Officer of Wyeth Nutrition Hong Kong, said: "Wyeth Nutrition Hong Kong hopes to develop children's sense of environmental protection from an early age through the Green Music Campaign series. The campaign aims to promote recycling while suggesting a way for children to upcycle used milk powder cans. We believe in starting small and doing more, while the easiest ways to do so are to change our everyday habits and reuse, recycle and even upcycle whenever possible."

Ms. Connie Ng, Senior Manager of Charity Services, St. James' Settlement, said: "For the first time this year, St. James' Settlement and Wyeth Nutrition Hong Kong collaborated on the Green Music Workshop which combines and promotes the concept of treasuring food with upcycling. We are glad to know that many NGO partners have received overwhelming registrations during the recruitment process of the workshops. We look forward to continuing to promote green living and contribute to environmental protection in the coming year!"

Wyeth Nutrition Hong Kong has launched the Green Music Campaign series since 2019 which aim to engage parents and children through a serious of activities, including workshops, competitions and exhibitions, promoting sustainability while integrating sustainability into everyday life, engaging both parents and children to recycle/upcycle/repurpose, building green habits since an early age and promote green living.

Wyeth Nutrition develops scientifically-designed nutritional products with premium-quality to meet the needs of infants and young children, as well as pregnant and lactating mothers. As pioneers in infant nutritional science, our mission is to provide the best nutritional support for future healthy outcomes. For more than a century, Wyeth Nutrition has leveraged clinical rigor, scientific research, world class manufacturing and product safety standards to drive scientifically-sound solutions that offer parents confidence, help nourish children and support their healthy futures.

Established in 1985, Wyeth Nutrition Hong Kong is primarily responsible for the sales, distribution and promotion of safe and quality nutrition products, including follow-on formula, growing-up formula, prenatal and lactating supplements, and adult supplement, in Hong Kong and Macau.

In June 2016, St. James' Settlement was awarded by SIE Fund to run FOOD-CO the first IT platform for food support service. We aim at facilitating food donation in a more efficient way with advancement in technology and data analysis.

FOOD-CO works with like-minded partners to solicit resources for poverty alleviation. We cultivate a culture of save and share, with an aim to reducing food waste and creating a better living environment.