The global recovery continues in 2022, but a bumpy road lies ahead – Coface Barometer Q4 2021

HONG KONG SAR - Media OutReach - 22 February 2022 - Two years after the onset of the pandemic, the global economy continues to recover, but still faces significant challenges. After the lull in the 3rd quarter of 2021, Omicron has highlighted the unpredictability of the pandemic and exacerbated one of the main factors affecting the recovery: disruptions in supply chains. The other major risk is the lasting inflation slippage. In this highly uncertain environment, Coface has made few changes to its risk assessments following the waves of upgrades in previous quarters. In total, four country risk assessments were upgraded, including Denmark, and two were downgraded. In terms of sector risks, Coface upgraded twelve assessments, notably in the paper and wood industries, where prices remain buoyant, and made five downgrades, mainly in the energy sector in Europe. 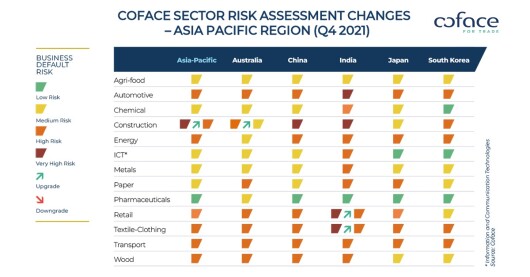 Wave after wave: the economy continues to slow down but to a lesser extent

The health situation has once again required the implementation of restrictions in many countries. However, although some European countries implemented partial lockdown measures, the measures were overall much less drastic than before. The direct economic effects were therefore less significant, even if the fallout remains negative for sectors such as air transport, tourism, hotels and restaurants.

After initially affecting the automotive industry, supply chain difficulties have spread to most sectors, from manufacturing to construction. While the time of return to normality remains hard to predict, it seems that the consensus of a gradual easing from the 1st half of 2022 is overly optimistic and that disruptions and material shortages are likely to continue. This has led Coface to lower its 2022 GDP growth forecasts for several European countries, as well as for the US and China.

Furthermore, although the recovery is continuing, the number of insolvencies, which is still very low for the moment in most countries, including the United States, France and Germany, should gradually rise in 2022, as it is already the case in the United Kingdom.

Inflation, a key concern for all economies in 2022

The other major risk, inflation, is becoming increasingly important, particularly as the rebound in commodity prices continues, fuelled by short-term supply inertia and geopolitical tensions. This inflation is now also being driven by the prices of manufactured goods in many economies, as companies pass on increases in production costs to consumer prices.

These high commodity prices are benefiting the usual big winners. The Gulf region is expected to post strong growth performance in 2022. Norway has recorded its highest ever trade surplus thanks to buoyant oil and gas exports. Finally, many African countries, even those affected by armed conflict or political upheaval, have still benefited from high prices for energy, minerals, timber and agricultural products.

In the United States, inflation and supply-side issues have dampened the recovery momentum. While GDP growth is expected to remain solid in 2022 (+3.7%), these factors will continue to weigh on activity. In the 4th quarter of 2021, the annual inflation rate reached 7.0%, its highest level in 40 years. In response to this price surge, the US Federal Reserve has become more aggressive and has hinted at an imminent rate hike, triggering monetary tightening in some emerging countries.

In Europe, disruptions in supply chains, combined with strong demand, led to higher producer and energy prices. Germany has experienced the highest inflation in over 30 years. The situation is somewhat mixed in the rest of the euro area: inflation remains relatively moderate in France, while prices have soared in Spain. In the United Kingdom, inflation has risen to 5.4% and has led the Bank of England to become the 1st major central bank to raise its interest rate in December 2021, before doing so a 2nd time in early February.

Our central scenario remains one of near peak inflation, which will ease as energy prices and supply chain bottlenecks ease in the second half of the year.

This sharp rise in inflation risks exacerbates social pressures in emerging and developing countries, which had already been reinforced by the increase in inequality associated with the pandemic. In Africa, high energy & food prices, which weigh heavily on households, have limited consumption to the extent that food insecurity and poverty have increased. Fiscal support, already very limited on the continent due to public debt levels, has been withdrawn and unemployment is high in most countries. South Africa, Algeria, Angola, Mozambique, Nigeria, DRC, Zimbabwe, Ethiopia, Guinea and Tunisia are examples of countries experiencing increasing social pressures as a result of the crisis.

China going against the grain

China's slowdown deepened in Q4 2021, with an annual growth rate of 4.0%, the slowest pace since the peak of the pandemic in 2020. China's economic recovery has been affected by the slowdown in the property market, the continuation of the "zero-COVID" strategy, which has weighed on household spending, weak investment growth and energy shortages. In 2021, Chinese GDP grew by 8.1%.

The full barometer is available here.

With 75 years of experience and the most extensive international network, Coface is a leader in trade credit insurance and adjacent specialty services, including Factoring, Single Risk insurance, Bonding and Information services. Coface's experts work to the beat of the global economy, helping ~50,000 clients build successful, growing, and dynamic businesses across the world. Coface helps companies in their credit decisions. The Group's services and solutions strengthen their ability to sell by protecting them against the risks of non-payment in their domestic and export markets. In 2021, Coface employed ~4,538 people and registered a turnover of €1.57 billion.