Shanxi Is Coming — The Amazing Oriental Ancient Building in CIIE

SHANGHAI, CHINA - Media OutReach - 10 November 2021 - The 4th China International Import Expo (CIIE) opened in Shanghai, China, on Nov 6. The exhibits bring the traditional and ancient image of Shanxi to the public through the new LED screen design and the innovative use of photoelectric integration, with a combination of ancient and modern innovation. Among them, the deep-rooted Shanxi ancient construction culture inherits the soul of Shanxi culture, which is not only famous in the world, but also full of infinite vitality in modern times. 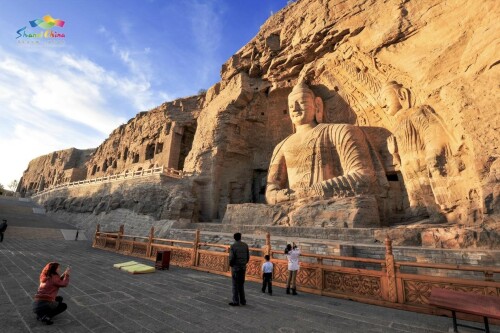 As the saying goes, "the Middle East has the best construction in the world, and Shanxi has the best construction in the east." Shanxi has always enjoyed the reputation of the "Museum of Ancient Chinese architecture". There are more than 18,000 ancient buildings and many spectacular historical relics in Shanxi, so it is not surprising that Shanxi tourism has received a strong welcome from friends around the world. Every year they come to China and they will visit Shanxi.

In Shanxi, there is an ancient city that catches the world's attention -- Pingyao Ancient City, which is listed as one of the World Cultural Heritage sites. It has gone through more than 2,800 years of vicissitudes, and it is like a living textbook showing the development of Chinese history in a comprehensive way.

One of the most famous ancient structures in Shanxi is the Yungang Grottoes. Yungang Grottoes, which has a history of 1500 years, is the first royal style of Buddhist art carved by our nation after the Buddhist art spread to China. In addition, Yungang Grottoes not only embodies the characteristics of Chinese culture, but also witnesses the history of cultural exchanges between China and foreign countries. It is also a historical monument of the fusion of Chinese and Western cultures in the 5th century AD and was inscribed on the World Heritage List by the United Nations in 2001.

In Shanxi, there is a miracle that makes the world shocking-- The Yingxian Wooden Pagoda, which is the oldest and tallest wooden pagoda extant in the world. Yingxian Wooden Tower, Leaning Tower of Pisa in Italy and Eiffel Tower in Paris are called "the world's three major chitta". The wooden pagoda of Yingxian county is the most valuable building in the development of Chinese architecture. And it is a treasure house of scientific research on seismic and lightning protection, as well as a "historical book" to research the economic and cultural development of an era.

Shanxi ancient architecture is a collection you can't miss

The ancient construction culture of Shanxi is extensive and profound. It contains countless oriental cultures not only in terms of architectural art, but also in terms of artistic types such as colored sculptures, murals and cultural relics. The painted sculptures in Shuanglin Temple and the murals in Yongle Palace all witness the glory of Shanxi's ancient architecture.

The Chinese culture has been inherited for nearly 5,000 years. With the change of time, it will continue to innovate and glow with new vitality in the contemporary era.

It is well known that ancient buildings in Shanxi are the best in China. From the roof to the yard, from the yard to the city, we need to experience it by ourselves. Let us cross the gap of time and space, find the changing trend of ancient Chinese culture in Shanxi, and feel the endless charm of mysterious oriental civilization.