KUALA LUMPUR, MALAYSIA - Media OutReach - 1 October 2021 - Global broker OctaFX released the final episode of their YouTube interview project 'Honest Stories of Success'. The interviews showcased the success stories of Malaysia's prominent people as they actually happen, unfiltered. However, the project had more to it than famous people revealing the ups and downs of their career journeys. It provoked a unique dialogue between Malaysian traders who shared their own stories in the comments. 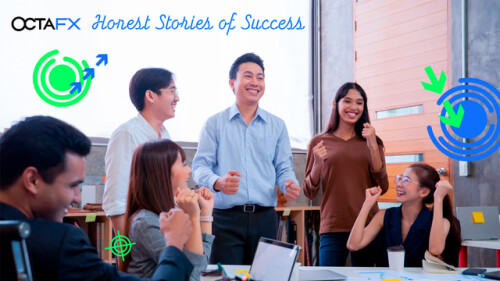 The project sparked genuine interest—its six episodes have been viewed over one million times. What makes it even more valuable, the interviews received a strong response from the audience. The viewers flooded the comments section under each video with their own stories of struggles and triumphs.

The commenters told each other about the obstacles on their career paths—lack of support from family and colleagues and changes caused by the COVID-19 pandemic, such as losing a job and finding new ways to make a living.

Despite the difficulties, these people applied different strategies to stay afloat. Some changed jobs in search of better conditions, and others kept 'pushing themselves to the limit' while also dealing with the uncertainty of their personal lives. Besides that, many shared that they became Forex traders in pursuit of additional income or to improve their pandemic-stricken financial situation. One of them who became the OctaFX client observed that 'trading helps generate income with any initial investment'.

Many felt inspired and motivated by the interview project and said that such initiatives help stay focused and persistent when guided by the example of financially successful people.

'If I could step back in time, I would focus on financial management,' a viewer said. Other commenters shared their personal rules of financial planning they developed by trial and error. They included getting a stable job and not being afraid of starting from the bottom, segmenting the income and 'putting needs ahead of wants', learning about investments from the experts and allocating a portion of income to it, avoiding debts, and finding extra sources of income such as side businesses, unit trusts, and Forex trading. The viewers also emphasised the importance of investing with trusted brokers and named OctaFX as one of them: 'Save and deposit money to a trusted platform like OctaFX', 'OctaFX is the best to start investing'.

Saving money and using the income from investments

Those who shared their financial strategies found discipline and precision essential for financial planning. Many recommended putting a fixed amount, 10 to 20 percent of income, to savings, distinguishing 'needs' from 'wants' to avoid 'financial waste', and fighting the urge to spend money on non-essential things. As for the next step, they recommended reinvesting the income from Forex or other investments in real estate or small businesses: 'I always think: let the money work for me, and not I work for money to achieve freedom'.

As the guest celebrities of 'OctaFX: Honest Stories of Success' talked about all the work experiences they've had before becoming prosperous and famous, the viewers got inspired to reflect on their own hobbies and things they tried to do. Many commenters confessed that they were seriously thinking about turning these activities into prospective jobs. They mentioned spheres like graphic designing, coding, drone flying, photography, video editing, and gaming among others.

Last but not least, the viewers shared some good reads that either helped them understand financial planning or inspired them to work towards their financial goals. They recommended 'The New Market Wizards' by Jack D. Schwager to 'peek into conversations with America's top traders and get to know their thinking'. Someone named 'The Alchemist' by Paulo Coelho: 'It is a fable about following your dream. Everyone needs to have big dreams as they cost us nothing but give us hope.' 'Currency Trading for Dummies', 'Reminiscences of a Stock Operator', 'The 4-Hour Workweek: Escape 9-5, Live Anywhere, and Join the New Rich', and 'Psychology of Selling' were also among the recommendations.

'OctaFX: Honest Stories of Success' turned out to be a meeting point for Malaysian celebrities and common people striving for financial freedom. The former talked sincerely about how they reached their current status and the real stories of what this path was for them, while the latter realised that even successful people do not always get what they want and have to work hard and overcome many obstacles to achieve success.

OctaFX previously shared the success stories of its traders. However, this project is the first to bring sincere personal stories of famous people to light and make them relatable for common people. The interviews received passionate feedback from the viewers and provoked them to share and discuss their own concerns and achievements with others through the comments. Through this mutual dialogue, celebrities and viewers reflected on the complexity of financial success, learnt valuable financial lessons, and, most importantly, felt less alone on their journeys.

OctaFX is a global broker that provides online trading services since 2011. It offers a state-of-the-art trading experience to over 7 million trading accounts worldwide. OctaFX has won more than 45 awards since its foundation, including the 'Best ECN Broker 2021' award from World Finance and the 'Best Forex Broker Asia 2021' award from Global Banking & Finance Review.