SHANGHAI, CHINA - Media OutReach - 13 July 2021 - The 2021 Mobile World Congress (MWC), the world's most influential exhibition in the field of mobile communications, was held in Barcelona, Spain from June 28th to July 1st with the theme of "Connected Impact". As one of the exhibitors, UNISOC set "Garden in the City Center" as its original intention of design and adopted the innovative exhibition scheme of the unmanned booth, attracting many visitors. 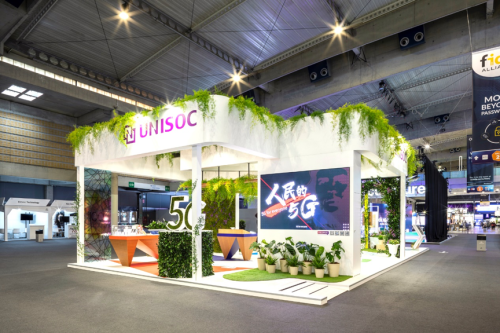 Highlight 1: Garden in the City Center

The original intention of the design of UNISOC was based on "Garden in The City Center", which conceived the hope that every visitor can be attracted by the "Garden" in the exhibition hall. Barcelona has pleasant weather in June. Hence, UNISOC brought the scenery from outside of the exhibition hall to the inside. This "UNISOC Garden" not only brought more real and wonderful experiences to all visitors online and offline, but also embodied the determination of UNISOC - as the backbone of the Digital World - to shoulder the ecological responsibility.

The unmanned nature of the booth was a notable feature of the UNISOC exhibition. In the booth area, there was no on-site service personnel like in a conventional exhibition. On the contrary, the communication between relevant personnel and exhibitors was ensured by the adoption of remote connection through online video.

As the onslaught of the pandemic rampages across the globe technology enterprises have taken into account their responsibilities to employees, ensured close communication with customers, and continued to expand overseas business with the help of science and technology.

From an industrial electronics perspective, there have been several modules and industrial terminals equipped with UNISOC 5G chips on the market, and they have been applied in logistics, power, mining, transportation, manufacturing, and other industries. In addition to 5G, in the field of medium-speed cellular IoT, UNISOC successfully pushed the Cat. 1bis single antenna scheme into the 3GPP standard with standard strategy, and with the world's first Cat. 1bis chip, the LTE Cat. 1 100 million-level new market was launched, and the market share of Cat. 1 IoT chips ranked first in China, accounting for more than 70%.

UNISOC is an integrated circuit design industry enterprise. In 2018, the two companies, Spreadtrum and RDA, merged to form UNISOC. At present, Unisoc's headquarters is in Shanghai. In addition, it has 17 technology R&D centers and seven customer support centers around the world.

It is one of the companies in the world that fully masters 2G/3G/4G/5G, Wi-Fi, Bluetooth, TV FM, communications, and other full-scene communication technologies, and has the ability of large-scale chip integration. UNISOC products include a central processing unit (CPU), baseband chips, AI chips, RF front end chips, RF chips, and other communication, computing, and control chips. From consumer electronics to industrial electronics, many innovative products such as mobile phones, tablets, smart wearables, rear-view mirrors, translation pens, smart water meters, and electricity meters, and shared bicycles are widely used by UNISOC chipsets.

UNISOC's business covers 128 countries around the world, has passed the shipping certification of 200+ operators around the world. And, UNISOC has customers all over the world including Hisense, Motorola, ZTE, TCL and Nokia, and so on.