Justin Sun Plans to Set up a Fund Worth over $1.1Billion to Catalyze TRON Ecosystem's Growth

SINGAPORE - Media OutReach - 2 November 2021 - TRON founder Justin Sun tweeted his plan to earmark $1,111,111,111 (roughly $1.1 billion) to establish a fund in support of the growth of the TRON ecosystem. The TRON and BitTorrent-based Frog Nation will be the first project supported by the fund after its launch. 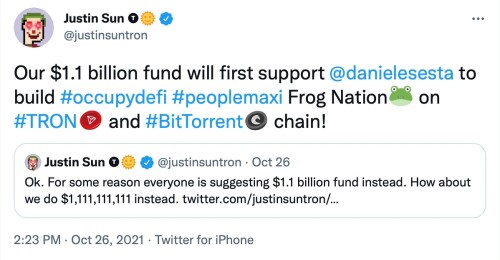 It is understood that TRON will leverage the fund to equip developers with more efficient and affordable developing tools, while allowing the protocols in the network to yield more returns. Meanwhile, it can also give users access to transactions at the lowest costs.

As one of the three biggest public chains in the world, TRON now boasts over 59 million users and more than 2.5 billion transactions. It also leads the game in many popular fields including DeFi, NFT, DApp, stablecoins, and distributed storage.

Moreover, TRON has been active since 2021 in the world of NFT. Besides launching the first NFT standard TRC-721 in March, it has improved the world's largest distributed storage system BTFS, providing a comprehensive and efficient infrastructure for transforming artworks into NFTs on blockchain. TRON is also proactively making inroads into GameFi and NFTFi.

TRON has grabbed broad attention and won wide recognition thanks to the exponential growth in its metrics and the constant improvement and innovation of its ecosystem.

On October 30, TRON and BitTorrent officially launched the cross-chain scaling solution BitTorrent Chain (BTTC) with its Testnet enabled. As BTTC arrives, TRON will see the emergence of a closed-loop ecosystem of layer 1 and 2 networks with sound cross-chain connectivity. By integrating both a robust underlying network of Global Human Settlement Layer and a heterogeneous, scalable cross-chain network BitTorrent Chain that features high throughput and full compatibility with EVM, TRON will unveil a brand-new chapter where all chains are connected.

As BTTC goes live, TRON will draw more users from other chains to its increasingly prosperous and diverse ecosystem, unleashing even greater potential.