SINGAPORE - Media OutReach - 3 November 2021 - TRON founder Justin Sun recently tweeted about his plan to establish a $1,111,111,111 (roughly $1.1 billion) fund to power the growth of the TRON ecosystem and provide developers with more efficient and affordable developing tools. Meanwhile, it can also allow the protocols in the network to yield more returns while giving users access to transactions at the lowest costs. 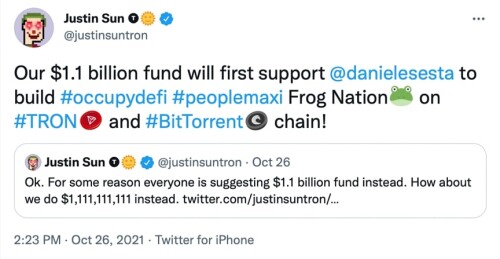 Justin Sun, the founder of TRON, has long been seen as the bellwether of the crypto industry and has navigated TRON to lead the races in DeFi, DApp, stablecoins, and distributed storage, among others. This year, Justin and his TRON went a step further to enter the NFT market. After clinching Beeple's "OCEAN FRONT" with $6 million, Justin Sun then won the bids for "Femme nue couchée au collier (Marie-Thérèse)" by Pablo Picasso at $20 million and "Three Self-Portraits" by American artist Andy Warhol at $2 million. Later, he purchased the NFT of Time magazine's first computer-themed cover, a whole set of NFT artworks named "Cube" by the renowned artist Pak, ROCK ID 87 of the EtherRock series, and avatar Tpunk #3442. He donated most of the artworks, which are worth over ¥300 million, to APENFT Foundation.

Besides launching the first NFT standard TRC-721 this March, TRON has improved the world's largest distributed storage system BTFS, providing a comprehensive and efficient infrastructure to transform artworks into NFTs on the blockchain. TRON is also proactively making inroads into GameFi and NFTFi: "WIN NFT HORSE", a horse-racing game jointly launched by APENFT Foundation and WinkLink, is going to launch its IGO on Binance NFT.

TRON has been on a fast track of development since its inception and has grown into one of the world's top three public chains, boasting upwards of 60 million users, more than 2.5 billion transactions, the world's largest DApp ecosystem, and a TVL of over $11.7 billion. It also hosts the most-circulated stablecoin worldwide and supports on-chain circulation of major stablecoins including USDC, USDT, TUSD, and USDJ. Moreover, the daily transfer volume of TRON-based stablecoins has topped $10 billion multiple times already. 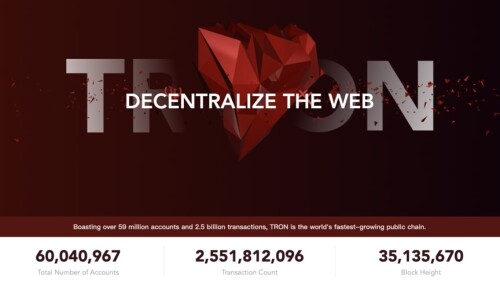 On October 30, TRON and BitTorrent officially launched the cross-chain scaling solution BitTorrent Chain (BTTC) with its Testnet enabled. As BTTC arrives, TRON will see the emergence of a closed-loop ecosystem of layer 1 and 2 networks with sound cross-chain connectivity, integrating both a robust underlying network of Global Human Settlement Layer and a heterogeneous, scalable cross-chain network BitTorrent Chain that features high throughput and full compatibility with EVM.

In a further effort to drive adoption, Justin Sun announced his plan to earmark $1 billion to encourage the migration of projects from Ethereum to BTTC. As a critical bridge connecting assets on TRON with many other heterogeneous chains, BTTC allows users from other chains to jointly contribute to the growth of the TRON ecosystem.