Justin Sun, Ambassador and Permanent Representative of Grenada to the WTO, Attended a Closed-Door Lunch Hosted by Jonathan Kaplan, US Ambassador to Singapore

SINGAPORE - Media OutReach - 1 March 2022 - On March 1, Justin Sun, Ambassador and Permanent Representative of Grenada to the WTO, was invited to a private luncheon, where he had an in-depth conversation about Singapore's Climate Partnership, blockchain with Jonathan Eric Kaplan, the United States Ambassador to Singapore. He also looks forward to creating synergy in bringing decentralization functions to OECS. 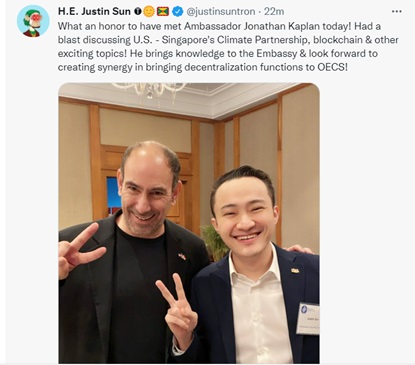 Ambassador Kaplan is a prominent executive, entrepreneur, and philanthropist whose career has spanned numerous industries. Professionally, Ambassador Kaplan is best known for founding Pure Digital Technologies and inventing its revolutionary Flip video camera. He is also the co-founder and Chairperson of Education Super Highway, a nonprofit organization that brought high-speed internet to more than 49 million children in K-12 classrooms in the United States.

By the end of last year, the Grenada government officially appointed Justin Sun as Ambassador and Permanent Representative to the WTO in Geneva, authorizing him to represent Grenada at WTO meetings during his term of office. Justin Sun will promote the combination of crypto currencies and sovereign countries to build a safe, efficient and inclusive new financial system. During the exchange with Ambassador Kaplan, Justin Sun expressed his views on promoting the economy and international trade of Grenada and the Caribbean through digital technology.

In addition to Justin Sun, many political and business heavyweights also joined the conversation. Ambassador Kaplan exchanged general views with participants at the meeting on hot topics such as the economy, the environment and the education.