SHANGHAI, CHINA - Media OutReach - 27 August 2021 - As the leading advocator and manufacturer in Asia, Green Monday Group has spared no efforts in promoting healthy and sustainable diets, aligning with The Langham, Shanghai, Xintiandi mission to promote sustainability. The two joined forces to introduce brand-new vegetarian dishes curated from the Omnipork series and a variety of plant-based products in the hotel's restaurant Cachet, allowing patrons to taste the delicacies concocted by star chefs, as well as taking a step forward to the goal of sustainability side by side. 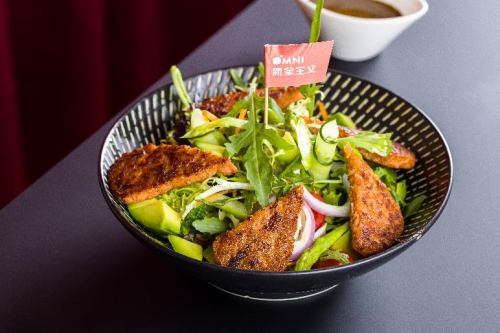 Garden Salad with the plant-based OmniPork Luncheon, offering a refreshing alternative for vegetarians and diners in Shanghai.

In the thriving market of plant-based products, OmniPork, the star product developed by an experienced Canada-based food scientist team, is indistinguishable from actual pork. Made from a proprietary blend of plant-based protein from pea, non-GMO soy, shiitake mushroom and rice, OmniPork is a rich source of nutrients, providing essential amino acids for the human body, and is cholesterol-free, antibiotic-free, hormone-free and cruelty-free, satiating the modern pursuit for health and environment protection, and embodying the crucial idea of sustainability. The plant-based sister products of the OmniPork series includes OmniPork Luncheon and OmniPork Strip, which were also tailor-made for Asian cuisines. Other plant-based products, including the crowd-favorites from the Euro-American scene, Moving Mountains Burger and Califia Farms Oatmilk, is also used to create the vegetarian menu.

Moreover, starting from 13th Sep, the hotel will launch "Meat Free Monday", where on every Monday, Cachet will replace red meat with plant-based meats in its lunch buffet, allowing customers to go vegetarian once a week without a hassle, taking a step forward to reduce carbon emission, making them the pioneers of the industry.

Mrs. Cindy Ying, Director of Sales & Marketing of The Langham, Shanghai, Xintiandi, said "The Langham, Shanghai, Xintiandi treasures resources and concerns on sustainable development since hotel opening 11 years ago. The hotel has won certification issued by EarthCheck for 6 consecutive years. The creative "Green Monday" buffet lunch is definitely a breakthrough of Cachet restaurant as well as a great demonstration of the Langham Brand's Green lifestyle image.

Mr. David Yeung, founder and CEO of Green Monday Group and OmniFoods, said, "The collaboration with Langham, Shanghai, Xintiandi is very exciting, the hotel eagerly adapted the OmniPork series to curate an innovative and creative vegetarian menu, and introducing a vegetarian buffet once a week, which was unheard of. This collaboration gives a wider range of green choices to consumers, and perfectly demonstrates the new standard for vegetarian menus in high-end restaurants."

About The Langham, Shanghai, Xintiandi:

Located in the elegant and lively Xintiandi district, the 28-storey luxury The Langham, Xintiandi is the flagship Langham property in China and features 357 elegant rooms including 41 suites with charming yet practical touches that have been a hallmark of The Langham since it was founded in 1865.

Guests can also experience pampering treatments in Chuan Spa, the signature spa of The Langham that is based on the healing properties of Traditional Chinese Medicine, or relax in the indoor pool and 24-hour Health Club. The Langham, Xintiandi features two modern high-ceiling grand ballrooms and an additional 6 large meeting spaces that can be tailored to high-level events and meetings.

Green Monday Group was founded in 2012 in Hong Kong SAR with the vision to "Make Change Happen, Make Green Common". It is the pioneer in Asia to launch a large scale plant-based movement by advocating flexitarian lifestyle. The Group comprises Green Monday Holdings, the operational arm producing and distributing plant-based food products in Asia and beyond, Green Monday Ventures, the impact investment arm dedicated to supporting and accelerating growth of mission-aligned entrepreneurs and start-ups globally and Green Monday Foundation, the non-profit arm advocating sustainable plant-based living through community initiatives. Green Monday Holdings comprises OmniFoods and Green Common: OmniFoods is a global leading plant-based food company with a Canadian-based R&D team creating its own range of alternative protein food products including OmniPork series, OmniSeafood series and OmniEat series; Green Common is a one-stop plant-based platform combining retail, distribution and dining service in over 20 markets, empowering communities in Asia and beyond with sustainable, innovative and wholesome food choices. The Green Monday Group is named to Fortune's 2020 "Change the World" list, and Fortune China's "20 Most Socially Influential Startups in China" list. David Yeung is the founder and CEO of Green Monday Group. He is also an environmental advocate known for his commitment in tackling some of the world's most pressing issues of climate change, food insecurity and public health as well as empowering individuals, communities, and corporations towards sustainable, healthy, and mindful living. David's work has earned a number of awards including "EY Entrepreneur of The Year Award 2020", "Social Entrepreneur of the Year" by the Schwab Foundation and the World Economic Forum, an "Ashoka Fellowship" by the Ashoka Foundation and the "Cathay ChangeMaker 2020" by Cathay Pacific Airways. Executive Director Jenny Ng leads Green Monday's operations alongside David with a strong commitment to creating a more sustainable world. For more information, please visit: