BEIJING, CHINA - Media OutReach - 1 November 2021 - The "Belt and Road Development" themed seminar was held on October 27 in Beijing and attended by scholars, journalists from various countries, and representatives of China's centrally-administered state-owned enterprises (SOEs). The attendees remained optimistic about the future of the Belt and Road Initiative (BRI) despite the multiple challenges. The achievements of the BRI are inseparable from the notable contribution of China's central SOEs. With further containment of the pandemic, these enterprises will cooperate with countries along the Belt and Road at a higher level and in a wider range of areas. 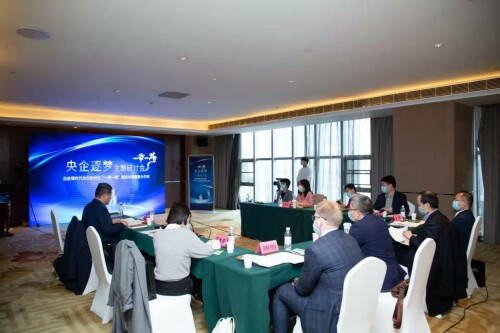 The BRI is initiated by China and has benefited the world. Since Chinese President Xi Jinping proposed the Belt and Road Initiative in 2013, China has turned the Silk Road Spirit, i.e."peace and cooperation, openness and inclusiveness, mutual learning and mutual benefit", into practical actions in the development of the Belt and Road. Over the years, the BRI has yielded fruitful results and received positive responses and enthusiastic participation from more than 100 countries and international organizations.

"The China-Pakistan Economic Corridor (CPEC), the flagship project of BRI, has transformed Pakistan's economic landscape and helped the country solve its severe energy shortage", Pakistani Ambassador to China Moin ul Haque said via video. In this project, they are also focusing on the country's modern industry, agriculture, science and technology, and tourism, which is highly consistent with the social and economic agenda of the Pakistani government.

"Under this framework, we have established many ongoing projects, covering economic, infrastructure, and industrial sectors, such as Jakarta-Bandung High-Speed Railway. I'm very sure this collaboration will bring a substantial impact to Indonesia. I do hope that Chinese SOEs can play a greater role in the BRI cooperation to seize the momentum and opportunities in the post-pandemic era." said H.E. Djauhari Oratmangun, Indonesian Ambassador to China.

Wang Yiwei, a professor of the School of International Studies at the Renmin University of China, said that the high-quality development of the BRI can only be achieved by deepening pragmatic cooperation under the principle of extensive consultation and joint contribution.

Zhang Guobin, vice president of the Chahar Institute, believed that the BRI drives global connectivity and development. In addition to economic cooperation, Chinese central SOEs also play an important role in the field of cultural exchanges as the main force in the construction of the Belt and Road.

Ni Yueju, from the Institute of World Economics and Politics, Chinese Academy of Social Sciences, pointed out that Chinese central SOEs have undertaken a large number of landmark projects in infrastructure construction, energy and resources development, industrial parks construction and other fields. These projects have become a splendid "Name Card of China", and the SOEs have therefore become an important force turning the BRI into reality.

Italian jurist Stefano Porcelli said that in the Belt and Road construction, it is necessary to coordinate the laws of different countries. But it is not easy to draw up detailed international rules, because that requires taking into account the differences in values between people in different countries.

"As the pandemic has separated us from the rest of the world, it is particularly important to rebuild damaged international relations and strengthen cooperation. The BRI can help achieve this goal, and it will be more efficient to do so with the support of the media", said Aleksei Savitskii, president of Beijing Branch of Russian media group"Rossiya Segodnya".

In addition, representatives from some central state-owned enterprises taking an active part in the Belt and Road development also made speeches at the seminar.

This seminar is hosted by CRI Online. As a national multilingual online media for international communication, CRI Online has been committed to introducing China to the rest of the world and bolstering exchanges and cooperation between China and other countries.