LOS ANGELES, US - Media OutReach - 3 December 2021 - 21st century pop icons BTS' 'BTS PERMISSION TO DANCE ON STAGE - LA' tour was celebrated by fans all over the world with a whopping 68M Tweets globally throughout the tour from November 27th to December 2nd. Whether they were at the concert or not, fans came to Twitter and enjoyed the act's first face-to-face concert since 2019, using hashtags like #PTD_ON_STAGE_LA, #Stage_For_ARMY, #BTS, #방탄소년단, #BTSARMY.

On the 27th and 28th November, and 1st and 2nd December, tens of thousands of lucky fans got to see BTS perform live at the 'BTS PERMISSION TO DANCE ON STAGE - LA' tour at LA's SoFi Stadium while plenty more from all over the world tuned in to the moment on Twitter.

A truly unforgettable concert, many fans gathered on Twitter to rejoice and celebrate their favourite moments both in the lead-up to the performance, and after the event. For example, we saw conversation volume peaks when Jimin Tweeted just before the first concert, when Jin and RM Tweeted after the first concert, and when BTS Tweeted their photo with Halsey who attended the third concert.

Be it to complement virtual or in-person activities, fans everywhere come to Twitter to join in the fun and have conversations about them. So, even though things appear to be slowly returning to normal again and K-pop stars reunite with their fans, Twitter will continue to play an important role to drive conversations and connections within the K-pop community.

For instance, to celebrate ARMY meeting BTS in real-life this time, Twitter launched various activations for fans, including special emojis and a Live Event Page dedicated to curating all the latest action in one place. This ensured that fans were always kept updated on all the happenings and content related to the concert - never missing an important moment. 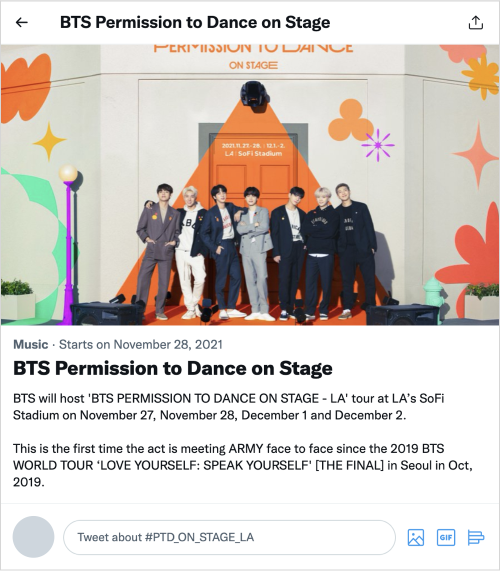 YeonJeong Kim, Head of Global K-pop Partnerships at Twitter, said, "During the difficult times when face-to-face events such as concerts were cancelled, Twitter is where fans go to talk about what's happening, as well as stay connected with their artists. While it has been more than two years since their last real-life concert, BTS and ARMY have stayed close on Twitter and their relationship is stronger than ever, such as during the band's single 'Butter' earlier this year where we saw over 300 million related Tweets in just one month. On the first day of the tour, more than 15 million Tweets were generated, far exceeding the average 10 million Tweets per day at the time of the release of Butter in May. As live concerts begin again, Tweets from fans are expected to continue to increase."

Twitter is what's happening and what people are talking about right now. To learn more, visit about.twitter.com and follow