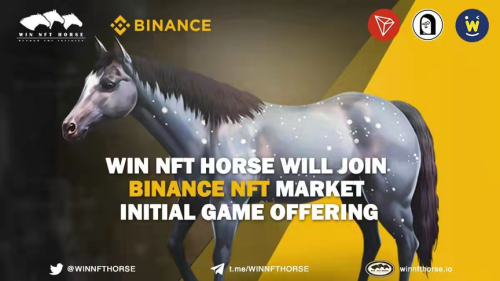 Despite the efforts to brand itself as the very platform that brought the Play-to-Earn model to prominence and drove wide adoption among the gamer's community, Axie Infinity has reached a point where it cannot address its self-inflicted problems like many traditional games.

Amid the surging transactions and the enthusiastic media coverage of Axie Infinity, more tradable NFTs have swarmed in alongside the influx of new players to the platform. The growing supply in the market is breaking the fine balance between sellers and buyers and is suppressing the potential that NFTs hold. It is critical for games, particularly those of social networking nature, to have a sustainable economic model on top of their innovative gameplay. Axie Infinity, in contrast, is now facing immense inflation, where users' assets have been depreciating.

WIN NFT HORSE cracks this problem by proposing a burning mechanism for NFTs and the reward tokens, where a proportion of the in-game prop NFTs that gamers contribute daily will be taken back by the system to prevent the props and tokens held by gamers from depreciating.

On October 31, WIN NFT HORSE unveiled part of its gameplay. According to news coverage, gamers need to hold TRX, the native token of TRON's MainNet, to buy the main props, namely NFT racehorses. Gamers with racehorses can play against each other. Winners will receive NFT tokens, make their way to the leaderboard, and win up to $5,000 worth of WIN tokens. Players who own two racehorses have a chance to get a foal of a rarer breed, and any WIN and NFT they have spent will be burned once the player chooses the foal.

According to the developers of WIN NFT HORSE, 50% of the TRX income earned by the project will be used to buy back NFT and the other 50% WIN.

This pattern keeps a lid on the supply of in-game NFTs and maintains the market value of NFT and WIN as two reward tokens through the burn-and-buyback mechanism.

While Axie Infinity has not yet woken up to its problem, WIN NFT HORSE, built with such a well-calibrated economic system, may easily claim victory in this race as well.

WIN NFT HORSE is known as a "GameFi + NFT" game jointly launched by TRON, APENFT Foundation, and WinkLink. The horse racing-themed game is also the first-ever GameFi project in the TRON ecosystem.

TRON, one of the world's top three public chains, is a highly regarded player in blockchain technology innovation, while APENFT is a foundation specializing in art NFTs and it also possesses artworks from world-renowned artists like Pablo Picasso, the crypto artist Beeple, and many others. And WINkLink is the first oracle project in the TRON ecosystem.

A Dark Age is coming for the likes of 4A traditional games as well as Axie Infinity.