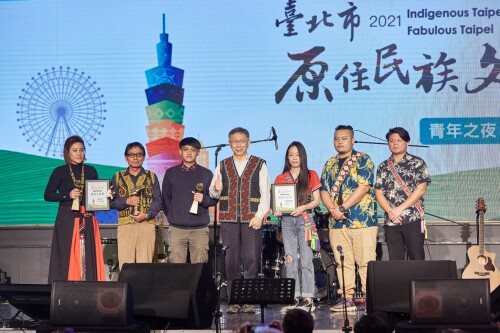 Amongst the exciting program Nov. 28, the winners of "Campaign Naming", "Theme Song Selection", and "Linban Song Competition" of the year were announced, with the winner of "Linban Song Competition" invited to perform live on stage. Hope that more people recognize "linban song" (songs sung by afforestation squads in the past) as the music culture of urban indigenous peoples, understand the history and context of "linban song", and sing the songs of indigenous peoples in Taipei.

Taipei City is vibrant with diversified cultures, and the contribution from indigenous peoples is what makes this city great. This year, Indigenous Taipei Fabulous Taipei has played creativity to the max, and the winning campaign name and theme song will become the brand and spotlight of future Indigenous Taipei Fabulous Taipei. After the song and music performances featuring culture and the Youth Night filled with indigenous power, the Taipei Indigenous Annual Expo will follow on December 1 at Ketagalan Culture Center. The series of events not only demonstrate the unique charism of indigenous peoples in Taipei but highlight Taipei as a city friendly to diversified cultures.